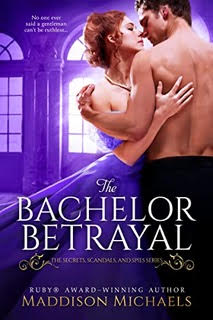 He wants justice
Underestimating Marcus Black is the last thing his enemies ever do. After all, the respected Earl of Westwood is a deadly threat… when her Majesty needs him to be. And his only goal is to avenge his brother’s murder. Which would be much easier if the viciously-skilled Lady Kaitlyn Montrose wouldn’t swoop in, knee him in the bollocks, and then run off with his only lead…

Kat is determined to avenge her beloved uncle’s murder and nothing will stop her. Especially not the devastatingly handsome, and equally lethal Marcus Black. The fact that he’s after the same target is a complication she hadn’t planned on. And as much as she enjoys taunting him, she has a job to do—one that doesn’t include sparring with the infuriating man at every turn. Except Kat has a new plan… one that Marcus will just hate.

Individually, Marcus and Kat are deadly. If they worked together, they could be unstoppable. But when attraction gets in the way of vengeance, it’s more than hearts on the line. And only one person can win…

PJ's Thoughts:
If you enjoy plenty of action and suspense mixed in with steamy historical romance, you are going to love The Bachelor Betrayal. It's the second book of a series but stands well on its own, though I will definitely be going back to read book one, The Bachelor Bargain.
Michaels tossed me straight into that action from the first pages of this fast-paced story and didn't let up until the final, breath-stealing conclusion. I loved that Kat was as skilled, confident, and fearless as Marcus. In fact, in many ways she was more so, as he soon learned. She had been trained by her uncle since childhood, after all, but she was more than a one-note weapon. The author did a good job of allowing her emotions to evolve, showing a softer side without losing that finely-honed edge.
Marcus is a man with baggage. A lot of baggage. He's also a man on a mission and isn't about to be led off course by a slip of a woman. Until he encounters Kat, all grown up and not willing to take a back seat to anyone when it comes to avenging her uncle's death. I really enjoyed the chemistry between these two, the snappy banter, how they challenged one another, and ultimately became a formidable team. I loved how Marcus came to respect Kat's abilities, how he desired her, fell in love with her, but never diminished her. How they worked together, each taking the lead at different times.
The mystery facet of this book was tightly plotted, with numerous twists and turns along the way that kept me guessing right up until the final reveals. I'm not easily stumped when it comes to mysteries, but Michaels did an outstanding job of keeping me on my toes. Just when I thought I had everything figured out, there came another twist and off we went again with a new suspect. I loved it!
This was my first book by Maddison Michaels. It certainly won't be my last. I very much enjoyed her writing voice, characters, and romance mixed with danger and suspense.
Posted by pjpuppymom at 5:00 AM