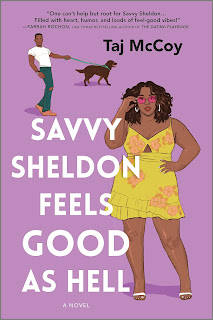 Savvy Sheldon spends a lot of time tiptoeing around the cracks in her life: her high-stress and low-thanks job, her clueless boyfriend and the falling-apart kitchen she inherited from her beloved grandma—who taught her how to cook and how to love people by feeding them. But when Savvy’s world starts to crash down around her, she knows it’s time for some renovations.Starting from the outside in, Savvy tackles her crumbling kitchen, her relationship with her body, her work–life balance (or lack thereof) and, last but not least, her love life. The only thing that doesn’t seem to require effort is her ride-or-die squad of friends. But as any home-reno-show junkie can tell you, something always falls apart during renovations. First, Savvy passes out during hot yoga. Then it turns out that the contractor she hires is the same sexy stranger she unintentionally offended by judging based on appearances. Worst of all, Savvy can’t seem to go anywhere without tripping over her ex and his latest "upgrade." Savvy begins to realize that maybe she should’ve started her renovations the other way around: beginning with how she sees herself before building a love that lasts.
PJ's Thoughts:
Savvy Sheldon is a kind, funny, hardworking woman who has reached a crossroads in her life. After six years together, her self-absorbed boyfriend dumps her for an "upgrade," telling her she's too fat, works too much, and doesn't devote enough of her time to him. Slowly, Savvy begins to realize the toll the relationship has taken on her, both physically and emotionally. She's lost her voice, subsuming her own values and opinions to his. In her career life, she's working more and more hours, taking on projects for multiple people, as well as her own assignments, with little to no thanks. It's slowly becoming apparent that the only person Savvy doesn't make a priority is herself.
I enjoyed this story. The author did a decent job of keeping it flowing and holding my interest. There are parts that lagged a bit, and descriptions of activities that seemed to go on too long, but never to the point where I put the book down and walked away. I loved the relationship between Savvy and her two best girlfriends. We should all have ride-or-die friends who pump us up, have our back, tell it to us straight, and go after a scumbag ex without hesitation. The food in this book (Savvy is a fabulous cook) is drool-worthy. Do not start reading if you're hungry. Trust me, it won't end well. *grin*
My heart ached each time Savvy encountered her ex with another woman and took two steps back in her self-confidence. Gaining the strength to put him firmly in her past was a slow - and realistic - process. But I cheered her on the entire way. Her new love interest, and his dog, both captured my heart. I loved that he noticed her and was intrigued by her long before she began her "self improvement" journey. I was a little put off by that journey in the first chapters of the book, thinking this might be a "I'll get skinny and my ex will come crawling back" story. It may have started that way in Savvy's mind but it turned out to be much more complex. First, she did not get skinny. She got healthy. More importantly, she learned to like herself, to value herself for the person she was rather than trying to turn herself into the person her selfish ex wanted her to be. Readers should be aware, however, that the process takes most of the book and there are diet, workout, and self-blaming issues that occur along the way.
This book is marketed as a romcom. For me, it read more like women's fiction with romantic elements. Yes, there is humor in the story, and there is a romance, and a happy ending, but the primary focus is on Savvy, her growth, and her journey. McCoy's characters are fully developed, relatable, and engaging. I enjoyed the diversity of the characters (Savvy's mother is Thai-American and her father was Black. Her love interest is also black) and the cultural references. This book is McCoy's debut. I don't know what she has planned next but I'll definitely be taking a look.
Posted by pjpuppymom at 6:00 AM