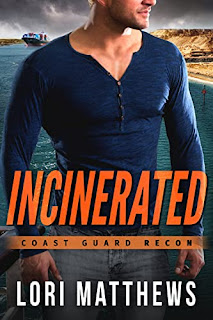 Meet Axel Cantor of the US Coast Guard’s TEAM RECON. As in reconstructed. As in broken and needs fixing.

When a cargo ship gets stuck in the Suez Canal and an American journalist on board ends up dead, Axel is sent in to investigate. He didn’t count on running into Sloan Bishop another reporter and the love of his life. Or maybe the hate of his life. Ever since he ended up in one of her articles.

Sloan is a driven reporter and will get the story at any cost. She’s on board the ship to document the first-ever female pilot to navigate the canal. But it all goes sideways, literally. The female pilot is blamed but Sloan knows there’s more to the story. When her best friend and fellow journalist, Eddie, is murdered, it becomes personal.

As the body count rises on the stuck cargo ship, the Sea Jewel, both Axel and Sloan will have to lower their defenses to work together to figure out what is really going on. There is something much bigger at play here, so big that Axel has to call in reinforcements – his fellow RECON teammates.

Matthews continues to bring the action, danger, and romance in this second book of her Coast Guard RECON series. The suspense is intense and intricately woven throughout the book. The romance is second-chance (one of my favorites) though it took a back seat to the suspense for me, likely due to the heroine. While I adored Axel, it took me a long time to warm up to Sloan, mostly due to her "get the story at all costs" attitude. She does finally realize the error of her ways - and they get their happy ending - but it does take a while.

Matthews' research is impeccable and brings the locations in her books to life. In this one, she made me believe I was on a ship grounded in the Suez Canal. The sights, smells, and sensations of being trapped on a boat controlled by mercenaries had me experiencing emotions right along with the characters. Full immersion into a story is one of the facets of writing at which this author excels.

The suspense/action/danger portion of this book was 5 stars all the way for me, keeping me on the edge of my seat with heart racing pretty much the entire book. The characters were fully developed, engaging my interest and emotions. Where it fell a little bit short for me was in the culmination of the romantic arc (it felt rushed) and a few threads related to the suspense storyline that were left hanging. I don't know if those threads will be picked up later or not but I wanted more closure. Other than those two issues (minor in the grand scheme of things), this was another high octane, glued to the pages, romantic suspense thriller from an author who is quickly becoming one of my favorites. If this type of story is your cup of tea, Lori Matthews is definitely an author you'll want to check out.

Incinerated can stand on its own but as the members of the RECON team feature prominently in both books I recommend beginning with Diverted (click to read my review) before moving on to Incinerated.