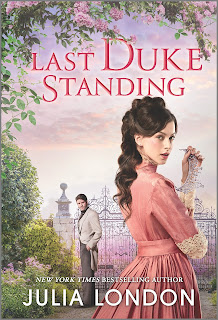 Charming. Cheeky. Cunning.When Crown Princess Justine of Wesloria is sent to England to learn the ropes of royalty, she falls under the tutelage of none other than Queen Victoria herself. Justine’s also in the market for a proper husband—one fit to marry the future queen of Wesloria.Because he knows simply everyone, William, Lord Douglas (the notoriously rakish heir to the Duke of Hamilton seat in Scotland, and decidedly not husband material), is on hand as an escort of sorts. William has been recruited to keep an eye on the royal matchmaker for the Weslorian prime minister, tasked to ensure the princess is matched with a man of quality…and one who will be sympathetic to the prime minister’s views.As William and Justine are forced to scrutinize an endless parade of England’s best bachelors, they become friends. But when the crowd of potential grooms is steadily culled, what if William is the last bachelor standing?
PJ's Thoughts:
This book was an absolute delight and exactly what I needed. It touched my heart with its depth of emotion, had me snickering over snarky banter, and laughing out loud with its well-placed humor.
London's characters were well developed and portrayed so vividly that they seemed to leap from the pages. I felt an immediate affinity with William though it took me longer to warm up to Justine. I liked that, as it allowed me to experience her growing self-confidence once she was out from under the pressure of the "minders" in her country. It was fun (sometimes hilariously so) to watch these two come to terms with their growing feelings with each disastrous marriage candidate the matchmaker presented to Justine. It was heart-tugging to experience the emotional peaks and valleys as they faced challenging obstacles in their paths. But that's what made the conclusion of their journey, William's unexpected gesture, and Justine's confident strength, so swoon worthy and satisfying.
Last Duke Standing is loosely connected to London's A Royal Wedding trilogy and it is in these books that we first meet William and Justine, as secondary characters in A Princess by Christmas. London inserts details of their previous encounters in such a way that readers should be able to begin their story in this new book without missing any of the nuances of their previous encounters. However, if want to experience those earlier encounters or you're intrigued by some of the secondary characters in Last Duke Standing, specifically Donovan, the male governess (though he prefers governor) to Beck's daughters, you may want to check out these books: The Princess Plan, A Royal Kiss & Tell, and A Princess by Christmas.
Posted by pjpuppymom at 2:00 AM