Review - - A Wedding on Sunshine Corner 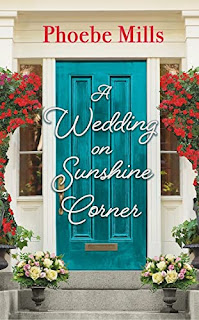 They’ve driven each other crazy for years, but were they fighting each other—or the chemistry between them?As the youngest in her loving, overprotective family, Savannah Lowe has always gone with the flow instead of going out on a limb…until now. Her new job running a preschool requires her to be all in. If only the father of one of her students wasn’t her brother’s incredibly infuriating, impossibly attractive best friend. Savannah has no clue what she ever did to make him dislike her, and now they’re stuck spending even more time together planning her brother’s wedding. Single father Noah Adams has his hands full between his job as a paramedic and caring for his young daughter. The last thing he needs is a complication like Savannah in his life—a girl he remembers being constantly pampered by her family. But the more he gets to know her, the more he sees how kind and compassionate she really is. Now their long-ignored, off-the-charts chemistry has them on a collision course…with each other.
PJ's Thoughts:
Phoebe Mills checks a lot of my happy reader boxes with this second book in her small-town, Sunshine Corner series. I love the community dynamic of this series, with its core group of friends at the center. She has created a strong, supportive environment with friends and family who stand ready to help while also not being above well-meaning meddling. Savannah's family, in particular, plays a strong role in both Savannah's character as well as her journey with Noah.
Savannah and Noah both come with layers and complications that give them complexities that made them intriguing characters who both held my attention and engaged my emotions. I love a brother's best friend romance trope. Add in enemies to lovers (okay, maybe not enemies in the strictest sense but definitely adversaries), single dad, and childhood friends, and I'm sold.
It was fun watching Noah and Savannah gradually move beyond the impressions formed in their younger years and begin to see the truth of who each of them is in the present. It was also satisfying to see each of them personally evolve and begin to learn their own strengths while learning to accept their vulnerabilities. I loved the sizzle and deep feelings that gradually grew between them. Noah's four-year-old daughter was a large part of those feelings. The story addresses the very real complications having a young child can cause in a new relationship while also highlighting the additional depth of emotion that child can also bring to that same relationship. I was cheering for a happily ever after for all three of them.
If you enjoy small-town contemporary romance with plenty of humor, heart, and happy endings, give this one a try. It's the second book of the series and while it can absolutely be enjoyed on its own, reading book one, The House on Sunshine Corner, will introduce you to many of the characters you'll meet in book two including Savannah's best friend and boss, Abby (heroine of book one).
Posted by pjpuppymom at 6:00 AM