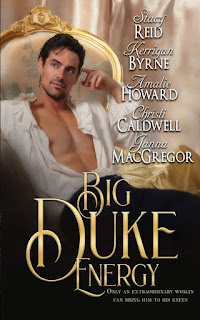 THE EARL ON THE TRAIN by Kerrigan Byrne Sebastian Moncrieff is a villain, a traitor, and a pirate, who has recently inherited an Earldom he never wanted. As a man who’s committed every sin imaginable, he knows his only chance at redemption is the one woman who ever reached through to his soul of ice. He’s kidnapped Veronica Latimer once before, and was enchanted by everything about her... This time, when he takes her, he’ll have to admit that she’s kept his heart captive since the moment they met. But can he convince her to forgive his past in order to claim a future?

LOVED AND FOUND: Christi Caldwell Lieutenant Thaddeus Phippen has lived a lifetime away from the only love he ever knew, a powerful duke's daughter. He's now returned from fighting Boney's forces, ready to put aside tragic battlefield remembrances and the memory of past heartbreak of love lost. Or that was the plan...until Thaddeus finds himself face-to-face with the one woman he soon finds he can't ever forget... Is the divide between former lovers too great to forge a future together...or can they at last have a love to last a lifetime?

THE WOLF OF WESTMORE by Amalie Howard Lord Wulfric Bane, the Duke of Westmore knows that blood is thicker than water, that duty is more important than personal desire, and that some things, like falling in love, are never meant to be. Cossetted and coddled Lady Jocelyn Capehart has been bred to be the perfect lady. On the outside, she is demure, sweet, and biddable, but on the inside, a vixen longs to break free of her cage. A chance meeting at a sultry club leads to one sinfully explosive night that neither of them can forget.

PUT UP YOUR DUKES by Janna MacGregor Martin "Duke" Richmond bows to no one, including any duke who protests what he publishes in his sensational gossip rag, The Midnight Cryer. However, he is occasionally open to negotiation when it comes to special requests from his wife. Estranged from her husband for five years because of the incendiary gossip he prints, Amelia Richmond finds escape from her lonely existence by volunteering at a foundling home, helping society's most powerful people avoid her husband's rancor gossip, and sleeping with her husband every Wednesday. Not an entirely unwelcome chore. When Martin goes on a rampage against one of the most powerful dukes in the British Isles, Amelia must use her wit and best persuasive techniques to rein him in. When her chance for a happy marriage appears within reach, Amelia finds herself falling for him once again, which is bad...very bad.

DUKE OF EVERY SIN by Stacy Reid Ethan Benedict, Duke of Bainbridge, has been an object of fear, fascination, and salacious gossip for years. To many, his reputation would make him an unlikely savior of a baby left on his doorstep. But Ethan saw the child as perhaps a pathway to redemption. What he did not anticipate was for his jaded heart to soften toward the mysterious young woman who infiltrates his household and secretly cares for the child.

PJ's Thoughts:
I'm a fan of anthologies. They offer readers a wonderful opportunity to read a shorter story from a favorite author, frequently featuring a secondary character from an existing series, while at the same time discovering new author voices without having to commit to a full-length book. Some of my current auto-buy authors have been discovered as part of an anthology I bought because of someone else's story. You really never know what gems await.
Big Duke Energy features five authors. Three are authors whose books I never miss, one is a well-known author I have yet to read, and the final author, Stacy Reid is one with whom I was not familiar.
I've read the stories by Caldwell, Howard, and MacGregor which are each attached to a series I've read, or am currently reading. I'll be reading the other two soon.
In Put Up Your Dukes, MacGregor explores a controversial - somewhat villainous - character from her Cavensham Heiresses series. Martin Richmond has stirred scandal for some of my favorite heroes and heroines without a hint of remorse. I enjoyed the layers MacGregor unveiled in his story, the hidden humanity, and the reformation of his character. The way it played out over the course of the story - with steps forward and back - brought realism to his journey and gave me the authenticity I needed to buy into his "new and improved" character. And I loved his wife!
If you're looking for extra spice with your romance, Amalie Howard's The Wolf of Westmore is a good choice. I adored these two! There's wonderful chemistry between the leads, great banter, and a history that adds layers of complications to their journey. I loved Jocelyn and how she took charge of her future. I was cheering her on so loud. This story is great on its own but if you've read The Beast of Beswick and/or The Rakehell of Roth you'll certainly enjoy catching up with some of the main characters from those books.
Christi Caldwell is known for writing stories with deep emotional impact and that holds true with this story of second-chance romance. I love friends-to-lovers and this couple brings an additional layer of complexity with a friends-to-lovers-to-enemies-to-lovers dynamic. I was pulled in from the first action-packed scenes and kept eagerly turning pages until the end. This one features brief appearances by characters from Caldwell's It Happened One Winter from her Scandalous Affairs series but you do not have to have read that book to fully enjoy this story.
I'll be back to update the review once I've read the remaining two stories in this anthology but based on the three I have already read, I can enthusiastically recommend it to all of you who love historical romance.
Posted by pjpuppymom at 6:00 AM