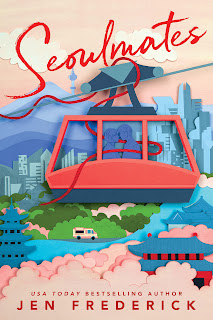 When Hara Wilson lands in Seoul to find her birth mother, she doesn’t plan on falling in love with the first man she lays eyes on, but Choi Yujun is irresistible. If his broad shoulders and dimples weren’t enough, Choi Yujun is the most genuine, decent, gorgeous guy to exist. Too bad he’s also her stepbrother.

Fate brought her to the Choi doorstep but the gift of family comes with burdens. A job in her mother’s company has perks of endless company dinners and super resentful coworkers. A new country means learning a new language which twenty-five year old Hara is finding to be a Herculean task. A forbidden love means having to choose between her birth family or Choi Yujun.

All Hara wanted was to find a place to belong in this world—but in order to have it all, she’ll have to risk it all.

This is the second book of Jen Frederick’s Seoul series; and while I believe technically you could read one without the other, I believe that reading the first one will give the reader a deeper understanding of the core conflict keeping the hero and heroine apart. In the first book, which I felt was a love letter to South Korea and adopted kids everywhere, Hara is this Everywoman character you root for to get her happy ending. While in one way she does get her HEA, the romantic element, perhaps the element many of us look for in a HEA more, does not get a HEA–and even getting a happy for now ending was a bit challenging. But there was so much to unpack with her story. She was an adopted kid from South Korea whose adoptive parents are from Iowa, where she grew up as the only Korean kid for miles. While she is totally loved by her adoptive mother, Ellen, her adoptive father ends up divorcing her mom and has a “real” (read: white) child with his new wife. Hara decides to go to Korea to find and meet her biological parents, much to the distress of her mom. When Hara arrives in Seoul to meet her biological father, she learns he died two days before and ends up attending his funeral instead, etc, etc.

This book picks up six weeks after the last book ends, where Hara has reunited with her birth mother and is given an opportunity to live in Seoul, learn more about her birth country and culture, and maybe fit in for the first time with people who look like her. Only as one always learns when she thinks life will be easier if she just lived somewhere else, she realizes, nope, she is still the Outsider. On top of it, the boy she met who made her experience of Seoul and finding her birth parents bearable is her “stepbrother” which in the Korean culture is the same as if they were true siblings, meaning any romantic relationship they may have wanted would be cultural incest and social suicide if they keep pursuing it. And they want to be together.

I have to hand it to the author: there was conflict galore in this book. I was so happy to have a second book that would perhaps resolve the issue of the romantic couple, but this book put the heroine (and the reader) through the wringer as one wondered if Hara would ever get a happy ending, if she would ever get to be with her true love without losing her mother again or tearing apart a family. There was also the conflict of Hara trying to find her place in society and a job/career she truly enjoyed. The book starts with her working for her mother–so she is known as the nepotism hire and all the co-workers treat her poorly because she didn’t earn her position. And there was also the conflict that Hara does love her adoptive mother and does also miss aspects of her adoptive home, Iowa, which she doesn’t imagine ever feeling. So the ending where Hara resolves her romantic issues as well as her career issues also resolves her homesickness for Iowa and the things she actually enjoyed there. It was also like a love letter written back to Iowa a bit.

The story runs the gamut of emotions, but feels authentic and immersive to Korean culture and the people who live there. If books are a way to travel to places you only dream about, I think these two books do a bang up job as a travel guide for places you should go. And I want to go. Mostly for the food described in the book–but I’m a very food oriented person. The setting and description of places is also very well done. And the love scenes are very sexy and sensual without feeling too graphic, just the right touch to connect with the characters and their romantic arc.