I Want You to Want Me
by Shana Galen
The Survivors - Book 12
Publisher: Shana Galen
Release Date: March 8, 2022
Reviewed by PJ 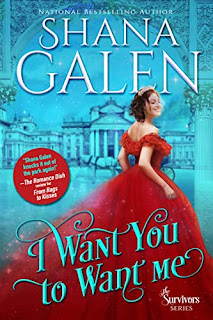 A cruel twist of fate…Nicholas St. Clare, youngest son of the Marquess of Averstow, was an avid horseman until his legs were crushed on the battlefield. The injury sent him home to England a broken man. Ashamed of his injury, he’s become a virtual recluse on his country estate until his mother, the dowager marchioness, insists he marry. Nicholas doesn’t want a bride who would be shackled to his broken body and privately despise him for being a cripple. He hates his weakness and doesn’t believe anyone can see past it.A stroke of good luck…Amelia Blackstock has always followed her family motto: A Blackstock doesn’t run from trouble. It runs from us. Unfortunately, trouble caught up with her, and when the world finds out, she’ll be ruined. When Lord Nicholas stumbles upon her sobbing, he tries to comfort her. His kindness backfires when they are discovered alone together, and Amelia faces even more scandal. Nicholas offers to marry her, but only if she’ll agree to a separate bed chambers.A happily ever after in jeopardy.Amelia concedes to a platonic marriage, but as her feelings for Lord Nicholas grow, she wants more. Nicholas is drawn to Amelia as well, but he fears risking it all by revealing the ugly truth of his injury. When Nicholas’s brothers-in-arms arrive for a house party, it seems everything that can go wrong, does. Between a lost pet pig, a fugitive wanted for treason, and a night of drinking gone awry, Nicholas and Amelia grow further apart. Nicholas is the last of the Survivors. Will he be the only one without a happily ever after?
PJ's Thoughts:
Shana Galen's The Survivors has been one of my all-time favorite historical romance series. These men, chosen for their skills, but also for their expendability, were never expected to return home from the battlefield. But, against all odds, twelve of them did. One by one, they have learned to live with their scars from those experiences, both those that are visible and the ones held deep inside. One by one, they have each found deep, enduring love with women who challenge them, support them, love them, until only one survivor remains...isolated, broken, alone.
Amelia and Nicholas ended up being one of my favorite couples of the series. Nicholas was so vulnerable, so fearful of being rejected because of his injuries. My heart ached for him. He's a good man, a caring man, but that didn't stop me from wanting to toss a bucket of cold water over him a time or two. So clueless. I adored Amelia from the moment Nicholas discovered her sobbing in his stable, her guard pig at her side. She was so refreshingly candid and pragmatic, but also with vulnerabilities of her own. I loved how she challenged Nicholas, how when she looked at him she saw a desirable man, not a broken one. I especially admired how she faced her fear in telling him how she felt and what she wanted. Nicholas wasn't the only one who evolved in this story.
The cherry on top of this delicious romance sundae was the reunion of the Survivors and their families and for fans of the series, a delightful surprise. The bonds forged in war among these men made them brothers and bringing them back together was a wonderful way to close out this series but this was more than just a gratuitous "photo op." Galen wove them into the story in a way that celebrated their reunion (so much fun and laughter) while also aiding Nicholas in his character's growth (no one can knock sense into a man like another man you've gone to hell and back with) and progressing his relationship with Amelia.
Rather than sadness, when I turned the final page of I Want You to Want Me, I did so with hope, with joy, and with appreciation for these wonderful characters who will continue to live on in my heart. Well done, Ms. Galen. I can't wait to find out what you have in store for readers next.
Posted by pjpuppymom at 6:00 AM