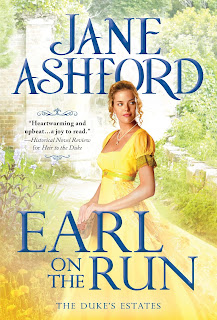 Finding an earl is the last thing on her mind.

At the end of the London season, Harriet Finch reluctantly travels to her wealthy grandfather’s country house. His rigid rules for whom she should marry spark her rebellious spirit. Yearning for a way to reclaim her freedom, Harriet takes long walks and plots her escape. A handsome rogue from the Travelers camp nearby catches her eye. He may be just the alternative she’s looking for.

Rejected by his snobbish, cruelly critical great-grandmother for his American upbringing, Jonathan “Jack” Frederick Merrill, the new Earl of Ferrington, joins a wandering group of Travelers, where everyone is welcome. He will take a look at this estate that has come to him and then, mostly likely, go back to Boston. But Ferrington Hall has an intriguing flirtatious neighbor who accepts him as he is. Soon, Harriet is all he can think about. Is their love strong enough to withstand the secret he’s been keeping? Time is running out, and a missing earl can’t hide forever.

In a word: adorable. Sweet. Effervescent. This is a sweet, loving regency romance that ticks the boxes for a bit of bathtub reading. I would say the characters, dialogue, and conflict remind me more of Julia Quinn–and I imagine the book series will feel like that, though the connecting books are not about siblings, but best friends.

Jack, the hero, feels very much like a Quinn hero: the kind that becomes friends with the heroine first rather than trying to enact revenge or get her into bed–or both. He’s humble, he’s charming, and he knows a good thing when he sees it–and Harriet is the One. I like how the author turns the rogue fantasy on its head a little, tweaking her readers’ noses by pointing out that while we may fantasize about falling in love with a rogue, it’s not an actual rogue we want. And Jack, who is taken for a rogue, is quick to point that out when the time comes…as does the heroine’s friends when Harriet says he lied about being a rogue.

Harriet draws on my heartstrings, as she is trying to protect her mother but also live her life on her own terms–not her grandfather’s. The grandfather–who is the villain of the story–still feels almost sympathetic at turns because he just doesn’t know how to behave any other way. When you’re used to your money buying anything you could ever want, you just can’t imagine someone actually thwarting you or turning their back on your money. He’s definitely a jerk, but like a jerk of the Old Goat variety, not the psychopath variety.

We see more scenes with her friends, like Charlotte and Sarah, who I can’t wait to see how their stories unfold. And Cecelia, who is married to a duke (and is the heroine of the first book of the series) is humorous, compelling and kind. Jane Ashford has a multitude of books to her name–and I don’t remember reading any of them before–but this one will definitely not be my last. She’s a solid storyteller with charming characters and sizzling tension as the couples wind the rocky path to true love.