Multi-published and award-winning author Caridad Piñeiro's love of the written word developed when her fifth grade teacher assigned a project – to write a book that would be placed in a class lending library. She's been hooked on writing ever since. Today, she has words of wisdom for aspiring authors and shares with us a little about her writing process. 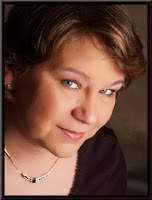 The first thing I tell aspiring writers is that there is only one wrong thing to do in the writing process – giving up!

Other than that, each writer has their own way of creating a story and completing it. What works well for one writer may not be the best way to proceed for another.

I used to be a semi-pantser in that I would start a story knowing three basic plot points – the beginning, the big climax and the end. Everything in between was up for grabs. As for the characters, I would know their basic conflict or “psychic wound”.

Since then I’ve become more of a plotter, forcing myself to layout more of the story line so that I’ve got more time to focus on the conflicts between the characters. I find that by doing so, I can really delve into what makes the characters tick and use that information to amend the story arc in a way that will help highlight those conflicts, bring them to the big climax and then hopefully, to the Happily-Ever-After.

One thing that I have not changed in my writing process is what I do with the first three or four chapters.

I try to suggest to new writers that they should think of those first few chapters as if they were the cornerstone of a building. If that cornerstone is shaky, then the whole building will be unstable. It’s the same way with a novel. It’s key to have a strong idea of the conflicts for the characters and the basic tone and premise for the story in those first few chapters. If they are sound, you will find that the rest of the story will be much more steady and logical.

Thanks for coming by to learn a little about my creative process! I hope you all have a wonderful holiday.

The latest from Caridad:

Sins of the Flesh 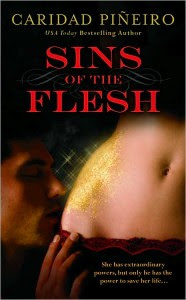 Caterina Shaw’s days are numbered. Her only chance for survival is a highly experimental gene treatment – a risk she willingly takes. But now Caterina barely recognizes herself. She has new, terrifying powers, an exotic, arresting body — and she’s been accused of a savage murder, sending her on the run.

Mick Carrera is a mercenary and an expert at capturing elusive, clever prey. Yet the woman he’s hunting down is far from the vicious killer he’s been told to expect: Caterina is wounded, vulnerable, and a startling mystery of medical science. Even more, she’s a beautiful woman whose innocent sensuality tempts Mick to show her exactly how thrilling pleasure can be. The heat that builds between them is irresistible, but surrendering to it could kill them both . . . for a dangerous group is plotting its next move using Caterina as its deadly pawn.
Posted by Andrea at 12:01 AM