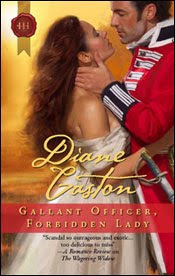 So many of the historicals I read feature a titled hero and/or heroine and while I enjoy those, every once in awhile I get the urge to read one with what I like to call “regular folks”. Diane Gaston’s Gallant Officer, Forbidden Lady is just such a book. Its hero, Jack, is a soldier and artist and its heroine, Ariana, is an actress.

Surviving the Battle at Badajoz was difficult for Jack Vernon, but sketching the horrible images he saw helped to get them out of his head. Two years pass and now in London, Jack is attending an exhibition at the Royal Academy of Art when he meets a beautiful young woman who is gazing at one of his paintings. He immediately feels a connection with her as she sees and feels the emotional depth in his work. Jack learns her name but she is whisked away before he can tell her that he is the artist. Six months later, he is asked by Lord Tranville, his mother’s (not so) former lover, to paint a portrait. Jack flatly refuses and for good reason – until his mother asks a personal favor if he would agree to do it. He is surprised to find out that the woman he has been commissioned to paint is Ariana, the young woman from Summer Exhibition.

Ariana Blane has followed in her mother’s footsteps when it comes to acting, but not when it comes to men. She feels alive performing on stage, but would pass on entertaining in the Green Room after every performance, if she could. There, Lord Tranville approaches her with an offer to commission a portrait of her as Cleopatra in order to publicize her role in the upcoming play. Ariana hesitates until she learns who the artist will be: the same artist whose work she admired at the exhibition. She informs Tranville that she will do it, but will not be beholden to him beyond that. She is pleasantly surprised to discover that Jack is the artist from the show because she had felt a connection to him as well. And as she sits for him, their mutual attraction becomes evident even though she feels like Jack is holding back. It also becomes clear to her that there is more than just common animosity between Jack and Lord Tranville. Much, much more.

I enjoyed Gallant Officer, Forbidden Lady very much. Jack and Ariana are strong, passionate protagonists – both hold their own and put their all in what they do. Ariana totally “gets” Jack and understands his need to draw and paint. She is eager to please him, but is certainly no pushover. She likes him; and because of his past she doesn’t want to push him too far.

She had indeed become besotted with this moody artist who kept so much inside, yet showed so much in his art. She wanted to unlock the mystery of him and to be someone with whom he could share confidences and engage in little adventures, as their excursion to Somerset House had been.

Jack tries to keep it “strictly business” with Ariana because of the Tranville connection, but finds himself unable to comply, which I found charming. Because of said Tranville connection, I wanted to strangle Jack’s mother a time or two, but the sweet secondary romance of Jack’s sister Nancy and her beau made up for it. If you’re looking for a fast-paced, rich historical featuring a cast of memorable characters, look no further than Gallant Officer, Forbidden Lady!