USA Today bestselling author Donna Fletcher has always loved to read. Her mother fed her passion by signing her up for a Young Adult book club, and from then on she was never without a book. Her passion for reading naturally led her to try her hand at writing, but not before she studied every book on writing the library stocked. She first sold to Kensington and has since written for Berkley and now Avon. Please help us welcome Donna to The Romance Dish! 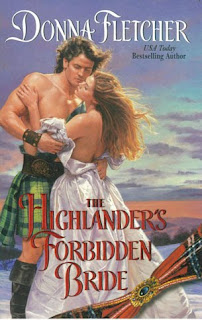 A big thank you to Buffie, Andrea, PJ & Gannon for having me here today. It’s an exciting time for me. Tomorrow is the release date for the last book in my Sinclare brothers’ series, Highlander’s Forbidden Bride. It seemed like only yesterday that the four Scottish Highlanders introduced themselves to me. The brothers immediately stole my heart as did their stories. I couldn’t wait to write about them, and they were just as eager to have their stories told.

In my night dreams and my daydreams they showed me their home in the northern most region of Scotland. They walked with me over the desolate yet beautiful moors that spread around their keep and through the lush forests that bordered their vast land holdings. They shared with me their hopes and dreams and I knew there and then it would be a challenge to find each of them the perfect woman. Especially since their personalities ranged from stoically quiet (Cavan), to overly pragmatic (Artair), to outrageously charming (Lachlan) and finally to the youngest brother (Ronan) who was once playful and kind and who was now bitter and vengeful, though with good reason.

It all starts in the first book, Return Of The Rogue, when Cavan, his brothers and clan members fight a barbarian horde. As the battle draws to an end Cavan and Ronan are captured and no soon as they are, they’re separated, neither knowing what happened to the other. After a year in captivity Cavan escapes, but he swears he will find his brother Ronan.

Cavan returns home a changed man, a man harboring demons, a man not ready to love. However, he arrives home to a surprise, it’s his wedding day. He isn’t ready to deal with a woman, especially one who is weak. He had asked me for a strong, courageous woman and, of course, I gave him what he wanted. It simply took time for him to realize it. Cavan learns his brother Ronan is alive and so the search to find him and bring him home begins.

That search starts Artair’s book, Under The Highlander’s Spell. Word was received that the healer Zia had cared for Ronan and so Artair goes in search of her. He finds her tied to a stake ready to be burnt for being a witch. Being practical, Artair wanted a woman who would make a good wife and mother. Love, he felt, could follow. I gave him exactly what he was looking for in a woman, though with a touch of zeal to her nature. Artair soon learns that being sensible doesn’t help when it comes to love. It is through Zia the brothers learn that Ronan has been taken by mercenaries.

Lachlan’s book, The Angel And The Highlander, finds him on a 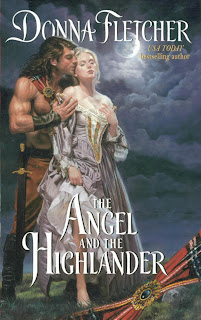 duel mission. While sent to collect the shrewish daughter, of a neighboring clan laird, from a remote abbey and return her home to enter into an arranged marriage, Lachlan’s to see if the mercenary group in the area holds Ronan. He arrives at the abbey and is shocked to learn that the woman he has come for is dead and that he is much too attracted to a beautiful nun. Lachlan was certain he’d find the right woman for himself without a problem. We all know that love isn’t easy and that was a lesson the charming Lachlan had to learn. The brothers discover that to find Ronan they have to find the daughter of the barbarian who had captured Cavan and Ronan.

That brings us to Ronan’s story, Highlander’s Forbidden Bride. Beaten to the point of not being able to see, Ronan had been cared for by a slave while held captive by the barbarians. He fell in love with her. Sold to mercenaries, he battles to return and free her. He’s too late and when he learns that she has died at the hands of the barbarian leader’s daughter, Carissa; he swears vengeance. Gone is the young playful and kind man replaced by a seasoned and hardened warrior, who intends to have his revenge.

It’s been a long journey home for Ronan. He has so much yet to settle not only with Carissa but with his brother Cavan. His homecoming isn’t easy, just as his brothers have learned neither his love. It’s Ronan’s turn now and he had no particular woman in mind. He told me he simply wanted to fall in love, a deep abiding love. I gave him the perfect woman, yet the most difficult love, for it necessitates forgiveness.

Finding a good love can be difficult enough, but as my heroes and heroines learned it’s recognizing a good love and keeping hold of that love that is the most difficult of all. What do you think it takes to keep love going?

I’m celebrating the end of the Sinclare brothers’ series with a special contest. I’m offering a short graphic novel that details Ronan’s journey home. For details go to my website http://donnafletcher.com/.
Posted by Andrea at 12:01 AM