Is it my imagination or is there an increasing lack of manners and common courtesy these days? It's not just the "younger generation" that has cornered the market on rudeness. Young, old, rich, poor. You name it, it's everywhere. 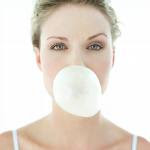 I work in a wine shop, and have customers from all socio-economic backgrounds. Last week, a well-coiffed, middle-aged lady came in looking for a specific wine. While she was standing there holding her designer handbag, she was chewing a piece of gum LOUDLY. I mean smacking it! As if that's not annoying enough, she starts blowing bubbles! This a grown woman, not a twelve year old. The entire time she's doing this, all I could think was, "Didn't your parents ever tell you it's rude to smack your gum?" Apparently not!

Then, of course, there's the ubiquitous cell phone use. Don't get me wrong. I love my phone, too, but I'm beginning to think everyone should be required to take a class when they get their phone: Cell Phone Etiquette 101. Please don't talk on the phone when you are completing a transaction, whether it's the bank, grocery store, what have you. It's rude! Tell the person you're talking to hold on or call them back. And for pity's sake, turn off your phone when you're at the movies, a play or concert!

I was at a Kenny Loggins concert this summer, and in the middle of a song someone's phone started ringing. This man in the row behind us answers it, "Yeah, I'm at the Kenny Loggins concert. Blah blah blah." and proceeds to carry on a conversation. Newsflash, dude! The rest of us paid to see Kenny, not listen to you talk on the phone! Aaargh!

worse was the recent cell phone debacle during Hugh Jackman's performance on Broadway in A Steady Rain. Gorgeous Hugh was in the middle of a very serious scene with Daniel Craig (also gorgeous), and some yahoo's cell phone starts ringing and ringing and ringing. Finally, Hugh breaks character and turns to the offender and says, "You want to get that?" Bravo, Hugh!! I hope the clueless idiot with the phone was mortified. Who knows, maybe he didn't think he did anything wrong, unlike the rest of who try to be more polite.

Have you seen or heard anything lately that really got on your nerves? Are manners becoming scarce?
Posted by Gannon Carr at 12:01 AM