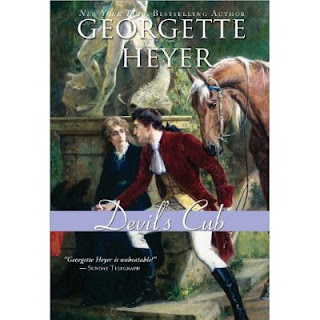 In my family, we always pronounced 'heyer' as 'higher' - but actually the joke in the title doesn't quite work as those in the know tell me it's actually pronounced 'hare' like the furry creature with long ears.

Sigh. The world is conspiring to stop me punning!

Having looked at Jane Austen last month, I thought I'd continue my reviews with a story by the other pillar of Regency romance, the immortal Georgette Heyer.

May as well start at the top, I think!

Georgette Heyer (1902-1974) is an Englishwoman (with a surprisingly exotic background as I discovered when I read her biography last year - she was half Russian which seems very odd as her books seem so quintessentially British!) whose first romance, THE BLACK MOTH, was published when she was 19. It's still in print!

Although she set books in the Middle Ages and the Elizabethan and Georgian periods, her most popular stories are set in the Regency. In fact, you could argue the case that she's single-handedly responsible for the thousands of Regency romances that have hit the presses since.

I went to a really interesting lecture that Jennifer Kloester, the author of GEORGETTE HEYER'S REGENCY WORLD, gave at a writing conference recently. According to Jen, when Georgette wrote her first Regency, there were only four nonfiction books about the period from 1811 to 1820 when Prince George (who would become George IV) took over the reins of government as Prince Regent from his incurably mad father George III. Now nonfiction books about the Regency period number in their thousands.

If you're a bookish Australian female of a certain age, odds are you grew up reading Georgette Heyer. She was as much a staple of our culture as cricket in the summer and chucking a shrimp (which we call a prawn!) on the barbie. My mother loved her books and passed them on to me and I can remember reading them over and over in my late primary school and high school years. They were the backbone of any self-respecting school library. I read them again in my late 20s, when a friend of mine collected the complete series. Again, I was captivated.

It is now MANY years since then.

Nonetheless, I was surprised when I picked up DEVIL'S CUB, one of the beautiful new SourceBooks Casablanca editions, how much of the story I'd forgotten. I remembered it was a sequel to THESE OLD SHADES. I remembered it featured a rake. And I remembered the heroine shot the hero. But other details had faded completely.

Something else I'd forgotten was quite how sparkling the prose is. The dialogue is as sharp as the rapier the Marquis of Vidal carries as he wends his rakish way around Georgian London (I'd also remembered this as a Regency story whereas in fact it takes place pre-French Revolution - which makes for some fun fashions, especially for the men who dressed like peacocks in the 18th century). DEVIL'S CUB was written in 1932 but the writing is completely fresh and new. There's no fusty tinge of the museum piece about this story. It's huge fun and Vidal is absolutely gorgeous, if in need of a good kick you know where!

The Marquis of Vidal is the spoilt, debauched, frighteningly intelligent only child of Leonie and the Duke of Avon, who were the hero and heroine of THESE OLD SHADES. He's 24 and running wild, killing men over the fall of a card and cutting a swathe through the ton's ladies. When his attentions turn to a respectable (if very flighty) middle-class girl, Sophia Challoner, scandal threatens. After a duel goes wrong and he has to flee the country, he decides his companion must be the innocent but mercenary Sophia, in spite of his father's warnings against seducing the girl.

Sophia is perfectly happy to be ruined, as long as she can shame the marquis into marriage afterwards, but she has a stalwart older sister, Mary Challoner, who decides to stymie the elopement. However Mary's reckless scheme to save Sophia goes awry when the Marquis decides if he can't have one sister, he'll take the other.

Hmm, you can see why he deserves a bullet, can't you?

The rest of the story covers the hijinks among the various characters as they attempt to sort out this tangle, complicated by the fact that for once in his life, Vidal decides to play the man of honor. What a pity his intended bride won't have a bar of him!

This is a romp, a romp that's as perfectly put together as a Mozart opera. I can see now why so many people choose DEVIL'S CUB as their favorite Heyer. There's wit, there's drama, there's comedy, there's a surprisingly deep hit of emotion amidst all the laughter. And Vidal is the perfect rake - along with most of the women he's ever encountered, I bet you fall in love with him. I sure did, right along with Mary. He's a rogue, but he's redeemable and it's wonderful watching him fall victim to a passion for the last woman he ever thought would interest him. Definitely some sigh-worthy moments there.

Just lately, I've been asked by a few people for my reading highlights of 2009. The best book I read this year comes from 1932 and it's DEVIL'S CUB. If you've never read a Heyer, pick it up and wallow in its delights. If you're a fan already, I know I'm talking to the converted.
Posted by Anna Campbell at 12:02 AM