Review -- Dark Side of Dawn

Dark Side of Dawn by Kathryn Smith 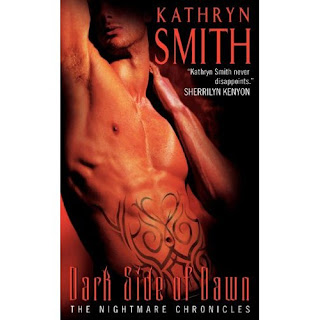 Anyone who knows me knows how much I absolutely loved Kathryn Smith’s Before I Wake. It quite literally blew me away. I have always enjoyed Ms. Smith’s historicals, but her first person contemporary voice is top notch. Dawn Riley is one of those characters that just sticks with you. A character you’d love to be friends with. Heck, I found myself wanting to be her. I was actually a bit worried about whether the second installment would come close to the brilliance of the first. Have no fear, Ms. Smith does not disappoint. I could not put it down!

Dark Side of Dawn picks up right where the first one left off and continues the story of Dawn Riley (half-breed daughter of Morpheus, the King of Dreams, and a mortal) and her hero, Noah Clarke. Dawn is a Nightmare, a guardian of the Dream Realm. In Before I Wake, Dawn accepts that she is different -- she can exist in both worlds -- and starts to adjust to living life that way. In this one, she completely embraces what she is. She faces the Nightmare Council for her actions in bringing a human, Noah, into the Dream Realm, even though it was to save his life. The Council is basically freaking out because no one, not even Morpheus, has ever been able to do that. So, they are threatening to have her “unmade”. As if that wasn’t enough, she is trying to help Noah’s ex-wife overcome a life-changing event (and boy does that lead to some interesting scenes) and she’s also dealing with the fact that a specialist might be able to wake her mother up from a self-induced coma (so she could be with her lover Morpheus in the Dreaming). And through it all, her relationship with Noah is moving forward and becoming serious. Needless to say, there is never a dull moment in this book!

I don’t think I’ve ever read a more down-to-earth and real character than Dawn Riley. The fact that this book is in first person makes it so easy for the reader to slip into her shoes. She’s sarcastic, smart and an everyday woman. Her character continues to develop and evolve while embracing and honing her powers. I love her faults just as much as her strengths and when an author can do that, they have scored in my book. Dawn is insecure at times, especially when it comes to Noah because, after all, she’s already been rejected by her father’s people. I was so glad to see that she and her mother started mending fences, too.

Noah comes out of his shell a bit more in this story. He always knows the right things to say to Dawn and who doesn’t love that? We also learn that there’s more to him than meets the eye. And Verek (the hot Nightmare who trains Dawn) figures more prominently in this book . . . which is good. *g* The reader gets to know several returning secondary characters better and a few new characters are introduced – including one that will creep you out. Sure kept me on the edge of my seat! Plus, we learn more about the Dream Realm and its secrets. Ms. Smith has created such an incredible world that sometimes I would ask myself, How in the world is she going to do that? And then she does. She ends the book with a line that has me waiting with baited breath for the next book! Dark Side of Dawn can be read by itself, but I would suggest reading Before I Wake first as it will only enhance your reading experience. So pick up both because I cannot recommend them enough!