An interview with author Carrie Lofty 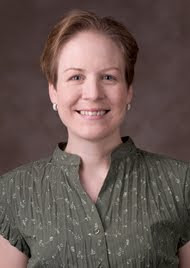 Andrea: Hi, Carrie! Thank you so much for joining us today at The Romance Dish! You have a new release, Scoundrel's Kiss, coming out January 5, 2010. Can you tell us a little bit about it?

Carrie: Scoundrel's Kiss is the stand-alone sequel to my Robin Hood-themed debut, What a Scoundrel Wants. When last we saw Ada of Keyworth, she'd just been rescued from the Sheriff of Nottingham and had seriously burnt bridges with her family. She and a young admirer, Jacob ben Asher, head off to what is now Spain. But she's haunted by the unlawful and sickening torture she endured and turns to opium for relief…

Gavriel de Marqueda is a warrior on the verge of taking his vows with the Order of Santiago. Before he can do so, he must pass one final test: save Ada from herself. He's vowed obedience, nonviolence, and chastity, but Ada refuses to be held against her will, even for her own good, and vows to use every possible resource to thwart Gavriel's offer of aid.

Andrea: Why did you pick the 13th century for your books? What is it about that era that draws you to it?

Carrie: I chose the late 12th/early 13th century initially because of the Robin Hood myths that associate him with the monarchy of King Richard the Lionheart. Thus What a Scoundrel Wants was set in 1199. For Scoundrel’s Kiss, I wanted a little time to pass so we could see where Ada went and what trouble she’s landed in.

Later I learned that life in the Kingdom of Castile changed dramatically after a battle in 1212, where they defeated Moorish enemies on the southern border. After that decisive win, when the Christian kings felt more confident about their grip on new territories, rights for women and Jews were curtailed and special privileges for knights were reduced. So I knew that to feature characters like Ada (an educated, independent woman), Gavriel (a warrior monk), and Jacob (a Jewish man at court), I would need to set the story before that battle.

Andrea: What kind of research do you do for your books?

Carrie: Initially, I’m a fan of the internet. I ground myself in what’s possible with regard the story I want to tell. From there I’m all about the Inter-Library Loan! I scour Amazon and website bibliographies for titles, grab them off of ILL, and then go through those bibliographies. My master’s in history wasn’t an accident—I love research. But after a while, I need to tell the story. I write without consulting my notes too much, just trusting that I absorbed the feel of it enough to get through the initial draft, and then I go back through to layer and fact-check when I revise.

Andrea: How has life changed for you since receiving "the call"?

Carrie: I think personal validation is the most important result. I’ve always loved writing, but there was always the little voice in my head wondering if I was good enough. Now, no matter where my career takes me, I have that in my pocket to keep forever.

Andrea: What's your favorite part about being a writer?

Carrie: Being a writer is such an indulgence. I get to make up stories all day. I work out of my house, or out of accommodating coffee shops and libraries. Research is my friend. I meet and work with interesting, engaging colleagues. And at the end of it all, no matter the hard work and industry headaches, I get bright-and-shiny fruits of my labor in the form of a book. How is this not the coolest job in the world?

Andrea: What do you like to do when you're not writing?

Carrie: *struggling to remember* Just kidding. Mostly. I love being entertained, and I think my brain needs it when it’s not busy thinking up (hopefully) entertaining things. So I read, watch movies, search for new music, and plot world domination. I also spend time with my family, and I love to dance. Don’t get me started on how awesome “So You Think You Can Dance” is!

Andrea: Who are some of your favorite authors to read?

Carrie: I love lush, beautiful writing, so my favorite romance authors are Candice Procter, Penelope Williamson, Laura Kinsale, and Patricia Gaffney. They all craft such amazing stories, not simply packed with emotion and fascinating characters, but with poetic language to describe every aspect of the hero and heroine's lives. I read those books and knew that's what I wanted to write. Those are the kinds of stories I love to read, so why not give them a try in my own style with my own unique voice?

Andrea: If you could only have 5 books, what would they be?

Carrie: Oh, that’s just mean! Only five?? OK, this is the best I can do (with apologies to all the magnificent books I’m leaving out): The Time Traveler’s Wife by Audrey Niffenegger, Dune by Frank Herbert, Atonement by Ian McEwan, Whispers of Heaven by Candice Proctor, and To Love and To Cherish by Patricia Gaffney.

Andrea: What's next for you?

Carrie: Last month, co-writing with Ann Aguirre under the name Ellen Connor, I sold a paranormal apocalyptic romance trilogy called “Dark Age Dawning” to Penguin. No word on the release date yet, but you can read more at http://ellenconnor.com/!

Quick six time!
Chocolate or Vanilla? Chocolate
Soup or Salad? Depends on the weather—salad for summer, soup for winter!
Dogs or Cats? CATS!
Coffee or Tea? Either. Both!
Flats or Heels? Flats. I have feet that protest heels.
Surf or Turf? Surf, as long as it’s lobster. Nom nom nom…

Thank you so much, Carrie!

For more information on Carrie’s previous and upcoming release, check out her website! Also, you can check out my review of Scoundrel’s Kiss here. And here’s a blurb:

When it comes to temptation...

Turning his back on his old life as a rogue, Gavriel de Marqueda has joined a monastic order in Spain and taken a vow of chastity. Before he becomes a monk, he must pass one final test: help a woman who has lost her way. But when he lays eyes on Ada of Keyworth, he is tempted beyond measure by her sultry beauty and dangerous curves...

Rules are meant to be broken...

Far from her home in England, Ada has been battling inner demons for more than a year. When she discovers that her only friend has abandoned her, she has no choice but to grudgingly accept Gavriel's help. But Ada is not fooled. Though Gavriel wears the robes of a monk, Ada sees that he is a virile man who looks at her with a hunger that matches her own--one that begs to be satisfied again and again....
Posted by Andrea at 12:01 AM