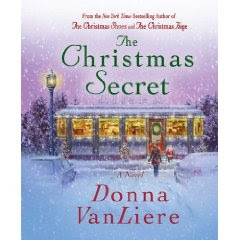 When a struggling young single mother saves the life of an elderly woman, she sets into motion a series of events that will test her strength, loyalty and determination - all the while setting her on the path to finding true love.

Christine Eisley is about to lose hope. Never mind Christmas presents for her two young children. She'll be lucky if she's able to earn enough money to keep a roof over their heads and food on the table. Her louse of an ex-husband hasn't paid a cent in child support for more than six months but continues to harass her while threatening to file for full custody of their son and daughter. Her irresponsible babysitter can't seem to arrive on time and her boss at the restaurant where she waitresses has threatened to fire her if she's late one more time. She just can't seem to catch a break. Then an elderly woman suffers a heart attack in front of Christine's house and the event sets Christine on a path that will change her life in ways she never could have dreamed.

A victim of the economic downturn, NYC accountant, Jason Haybert has reluctantly accepted an offer from his grandfather to spend the month of December working in his grandfather's small town department store. Overflowing with self-importance, Jason has forgotten that there's more to life than big salaries, convenient girlfriends and prestigious corner offices. His grandfather plans to use the gift of this month to teach Jason a few life lessons. But, when Jason begrudgingly agrees to volunteer at a daycare center for underprivileged children, it's the young children in his care who teach him the most important lessons and ultimately lead him to the woman into whose hands he will place his heart.

This emotional Christmas story takes the reader on a young mother's journey from helpless despair to cautious hope and, finally, to love and joy.  Christine is tested time and again and, in desperation, makes some decisions that could have had tragic consequences.   I had a real problem with one of those decisions even though I understand that she feels she has no other choice.  It's indicative of just how alone, and desperate, she feels.  But a strong cast of secondary characters, through their selfless generosity and friendship, pull her back from the brink, teach her how to trust again, to accept help and to believe in miracles.

The Christmas Secret is the fifth book in the "Christmas Hope" series by New York Times Bestselling author, Donna Van Liere. It's a beautifully written holiday story that reminds us of the importance of counting our blessings and extending a hand to those less blessed. Give yourself a gift this Christmas and read The Christmas Secret.


Have you read any books by Ms. Van Liere? What's been your favorite Christmas book this season? A randomly selected commenter will win a hardback copy of The Christmas Secret.