We are so happy to have author Jane Goodger dishing with us today. Jane's latest book, A Christmas Scandal, is the second in her Victorian era Christmas trilogy. Jane is a former journalist who decided that she preferred her stories to have a happy ending, so she became a romance author. She lives with her husband and three children in New England, and they do their best to always give her a happy ending. I was introduced to Jane (and her books) when we were living in Naples, Italy. Please welcome my friend, Jane, to The Romance Dish. 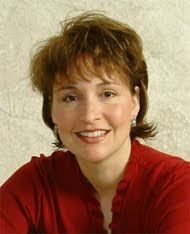 Merry Christmas RomanceDishers! To Gannon, who I met in Naples, Italy, Buon Natale. I’m honored to be the guest blogger today. Because I’m in the middle of writing a Christmas trilogy, I thought I’d write about Christmas and dish about my kids and Santa Claus.

Two of my three children no longer hear Santa’s sleigh bell, which makes me a bit sad. Anyone who knows the story of the Polar Express by fellow Rhode Islander Chris Van Allsburg, understands the poignancy of this loss.

My middle boy, Thomas, wanted to believe so badly that it was a relief of sorts to him when I finally told him that, no, there is no Santa. He’s an intense little boy with a heart far too big for his little body, and the idea of Santa was so wondrous to him when he was little that the loss of his fervent belief is heartbreaking.

He would ask again and again for the truth, but always in front of his little

sister, so I had to lie. It’s a lie a parent shouldn’t feel guilty about, but I did. I don’t like lying, especially to my children, but this whole Santa thing was supposed to give me a pass on that mother guilt. He’s ten and far too old to believe, and so when he asked this last time I brought him up to his room and we had one of our little sit-downs. He knew. In his heart, he knew. But he was still sad, in a mature way that was also heartbreaking.

My oldest believed until he was nine and his reaction to this news was anger. He’s vowed to never tell his children the Santa story and cannot believe I continued to perpetuate the lie, to sucker kids. He’s thirteen now and very opinionated, so I let him go on and on how parents should never, ever tell children about Santa knowing that when the time comes, he will. Most of us do. For some reason, when we have kids we remember that magic, that fluttering feeling in the pit of our stomach on Christmas Eve knowing that Santa is on his way and will stuff presents beneath the Christmas tree and we want our kids to experience it too. If only for a little while.

I still remember my father’s face when I told him scornfully that there was no Santa. I was five. Some rotten kid made fun of me because I still believed in the jolly man and I was embarrassed that I still did. My father rang a little bell on that Christmas Eve and called up the stairs that I better get to bed because he’d just heard Santa’s sleigh. And that’s when I informed Dad that I no longer believed. He looked so darned sad. I was the youngest, you see, and he knew that Christmas would never quite be the same again.

Christmas in the Goodger house is still fun and will probably continue to be fun long after my little girl, Claire, stops believing. We’ll talk about the true meaning of Christmas (remember Jesus?) but I’ll still miss Santa.


Thanks so much, Jane, for being with us today! Romance Dishers, one lucky commenter will receive a signed copy of A Christmas Scandal today.