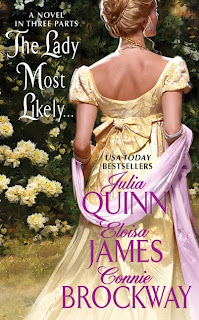 I was anxious to read this book for two main reasons: one, because it is written by 3 talented authors who have written so many books that I love; and two, I had heard it touted as “sort of like an anthology, but different”. That, of course, had me wondering why it was different. After reading it, I would call it “three stories within a story”.

The Lady Most Likely... begins at the London home of Lord and Lady Finchley. Hugh Dunne, Earl of Briarly, is visiting his sister and asks her to help him find a bride. He has recently had a near fatal experience with one of his horses and feels the need to settle down and produce an heir. So, he asks Carolyn to compose a list of eligible ladies. The first two young ladies that come to her mind are Gwendolyn Passmore and Katherine Peyton. Since the Season has just ended and the household was prepared to leave anyway, Caro immediately starts planning a house party at Finchley Manor.

Julia Quinn’s contribution begins with Alec Darlington, the newly minted Earl of Charters and Hugh’s best friend, escorting his youngest sister to the house party. Octavia is fit to be tied when she sees that Gwendolyn Passmore is attending. According to his sister, no one will even so much as look at her if Miss Passmore is in the room. She considers Gwen, heralded as the undisputed beauty of the ton, as snobbish because of her refusal of no less than four proposals. But the young lady that Alec meets is nothing as Octavia describes. He learns that Gwen is painfully shy and does not like attention. He also discovers just how wonderful she is.

She was very quiet, then she said, “People often do. I—” She looked to the left and right, as if she were making sure no one else could hear. Which was absurd, because they were completely alone. But somehow it looked like the correct thing to do, and something about it warmed his heart. Because whatever it was she was going to say...

It was for him. Just for him.

She leaned forward, but just the tiniest bit.

Alec’s heart skipped a beat. That quarter inch... That tiny sliver of a space that she’d eliminated between them...

It took his breath away.

I absolutely adored that scene! Julia Quinn’s charm and wit shines through in this story with characters that you’re sure to love.

Connie Brockway’s story is next and starts as Miss Katherine Peyton is walking in the garden with Hugh, anticipating a kiss. Just as they are about to, they are interrupted by Captain Neill Oakes, a long-time friend of Kate and her family. The same Neill Oakes that she had loved all her life. The same Neill Oakes that pushed her away following a kiss they shared four years ago, right before he went into the army. Now he’s charged with watching over Kate after her brother takes off in fear of the matchmaking mamas. Neill does his job honorably and Kate realizes that the reckless boy has turned into a considerate man. A considerate man who very much would like to finally claim her as his own.

I love reunion stories and this one is delicious! Connie Brockway has quickly become a favorite author of mine and this short story only confirms it.

And finally, Eloisa James tells Hugh’s tale of finding love. Now that both of the prospective brides on his list have been snatched up by other men, Hugh must consider someone else. Preferably someone who won’t mind that he spends hours upon hours in the stables with his horses. But the only person on his mind is his childhood friend, Lady Georgina Sorrell. Georgina is a widow and though her marriage wasn’t a match made in heaven, she wasn’t unhappy. She just wasn’t completely...happy. She has no desire to marry again, but Hugh is determined to change her mind.

His eyes laughed down at her, and all that laughter was side by side with desire. For her.

That was what she never saw in all the days of her marriage. And what she saw in the eyes of other men, looking at the women they desired.

Eloisa James’s story is utterly romantic and it had to be since it featured Hugh and the whole objective of the house party was to find the lady most likely to capture his heart. It is a beautiful tale that will surely capture your heart!

I said earlier that I would classify this book as three stories within a story. I say that because the beginning, end, and the chapters in between each author’s own story give readers a glimpse into the happy marriage of Carolyn and her husband, Piers. Theirs is obviously a love match and Caro wants nothing less for her dear brother, Hugh. Each story plays right into the other and all of the characters are woven into each story. It was a concept that, in my opinion, worked in every way. Ms. Quinn, Ms. James, and Ms. Brockway planned out the perfect scenario and I sincerely hope that they try it (or something like it) again in the future. Fans of any or all three authors will thoroughly enjoy this delightful gem!