Review -- Sunrise with a Notorious Lord 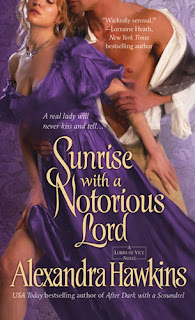 Christopher Courtland, Earl of Vanewright—known around London as “Vane”—is the very picture of a rich, handsome ladies’ man. Why shackle himself to just one lady when he’s free to sample them all? In spite of his own mother’s attempts at matchmaking, Vane has sworn to stay single. Until he has a chance run-in with Miss Isabel Thorne...

A modest and refined beauty, Isabel is a lot more brazen than she appears. When a pickpocket tries to make away with Vane’s bejeweled snuffbox, Isabel attempts to thwart his escape...and manages to steal Vane’s heart. But the harder he tries to seduce the sharp-tongued, strong-willed Isabel, the more she resists. Now it’s up to this tried-and-true bachelor to find a new way to play the game...or risk losing the one woman who’s ever captured his heart.

Despite his mother’s many matchmaking attempts, Christopher Courtland, Earl of Vanewright, has remained blissfully unscathed thus far. Luckily for her, he adores her immensely. Unluckily for him, his close friends enjoy teasing him about it.

“You are being ridiculous.”

It annoyed Vane that his friend was not taking him seriously. “Am I? Last month, my mother told Lady Sankey that she would happily pay any willing miss a King’s ransom if she was clever enough to trick me into marriage.”

“And who told you this?”

“Lady Sankey, when I discovered her disrobing in my bedchamber.” His hand tightened on Sin’s shoulder, when the marquess surrendered all sense of decorum and started laughing. “God’s teeth, Sin! Lady Sankey cannot be a day under sixty! Can you not fathom what my mother has done? Although she denies it, my mother has placed a veritable bounty on my head. If this gets out, every female from the lowest scullery maid to your grandmother will be dreaming of ways to compromise me into marriage.”

Sin sobered, and urged Van to continue walking since they were drawing attention. “Fortunately for you, my grandmother has long since departed this world. However, you might want to avoid my sister this season.”

Vane is the “reluctant heir” and I really felt for him in his relationship with his father. Vane has tried so hard to be the son his father wants, but has never been able to live up to the legacy his brother left. I believe that made him appreciate his mother that much more. Who can resist a man who loves his mother?

Isabel and her sister, Delia, have to come to London at the confidential invitation of the Marchioness of Netherley. The marchioness is hoping to make a match for her son, the Earl of Vanewright, with Delia. What Isabel doesn’t count on is falling for the earl herself.

Sunrise with a Notorious Lord is the fourth book in Alexandra Hawkins’s Lords of Vice series featuring seven sinfully delicious men of the ton. This book isn’t my favorite of the ones published thus far—there were a couple times when I wanted to strangle Isabel, though I did appreciate the lengths she went to for her sister—but it is a great addition to the series. I really love the way Ms. Hawkins depicts the camaraderie between the male friends. They are like a typical group of guys who never let an opportunity to rib one another pass by, but are also completely loyal to the end. There is never a dull moment when the Lords of Vice get together! Even though Sunrise with a Notorious Lord is part of a series, it stands completely on its own, as do the others in the series. I recommend them all!


So, I mentioned that the Lords of Vice are a great group of guys who tease each other, but will defend each other to the end. What other series can you recommend that center around a group of guys that behave in this manner?

Alexandra Hawkins has graciously offered to send three lucky commenters (living within the United States or Canada, due to mailing restrictions) one copy each of Sunrise with a Notorious Lord!


Also, here is the beautiful trailer for Sunrise with a Notorious Lord which releases TODAY!!