Just Between Us - - Seven Minutes in Heaven by Eloisa James 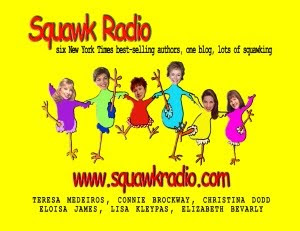 You might say that PJ and I owe our friendship to Eloisa James. We first met and started chatting on Squawk Radio, a group blog hosted by Eloisa along with Elizabeth Bevarly, Connie Brockway, Christina Dodd, Lisa Kleypas, and Teresa Medeiros, and on Eloisa’s bulletin board. We have both been avid readers of Eloisa James’s books for a dozen years or more and have read all thirty of her novels and novellas and Paris in Love, her memoir of her family’s year in Paris. We have read many of them more than once. We were among the members of her bulletin board community who, back when we were still debating whether Jemma would end up with Elijah or Villiers, urged Eloisa to write the stories of the children in the Desperate Duchesses novels. Three Weeks with Lady X, the first of the second-generation tales, exceeded all our expectations and remains a favorite of PJ’s and of mine. For all these reasons, Seven Minutes in Heaven, seemed the perfect choice for our second duet book chat.

Janga: The hero of Seven Minutes in Heaven, Edward Reeve, was once Teddy, the mischievous small boy who made us laugh and captured our hearts in Desperate Duchesses, the first book in this series that, with Seven Minutes, totals nine books. The novel’s heroine, Eugenia Snowe, was once a small girl, formidably intelligent and delightfully eccentric, growing up in the most unconventional home of the richest man in England, her father, the fittingly named Lord Strange. One of the things I liked best about Seven Minutes was seeing Ward (Teddy) and Eugenia grown up but still unmistakably the children I adored in those earlier books. Young Teddy refused to be bound by rules, and the reader first meets Ward disregarding the rule that an appointment with Mrs. Snowe requires three weeks’ notice. There is also the matter of his having fired a Snowe’s governess, something that is just not done. Eugenia may be poised and powerful as “the owner of the most elite agency for governesses in the whole of the British Isles,” but when the narrative voice observes that “Having grown up in a household that prided itself on eccentricity, Eugenia was a fierce proponent of the virtues of conventional living,” I see that lonely little girl critically ill from rat-bite fever. The novel can certainly be read and enjoyed by readers who never read the first Desperate Duchesses books, but I think it resonates with particular richness for those of us who loved the original characters. Do you agree, PJ? 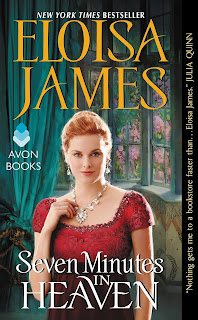 PJ: I do agree, Janga but I also think James develops these characters and tells their story in such a way that it can be fully enjoyed by readers meeting them for the first time. For me, it’s like attending the wedding of someone I’ve known and loved since childhood. My joy would carry an extra layer of depth while taking nothing away from the joy of, say, the maid of honor who didn’t meet the bride until college. While we’re on the topic of children, I’ve always felt Eloisa was especially adept at creating fully dimensional young characters in her stories and Seven Minutes in Heaven is no exception. Is it too soon to start begging Eloisa for stories featuring a third generation? As you mentioned during our chat about this book, Lizzie and Otis, Ward’s half-siblings who come into his care after the deaths of their parents, are not wallpaper characters. Even young Marmaduke, Lord Pibble, a secondary character with brief page-time, leaves an indelibly vivid impression. Growing up with four younger brothers, I well understood “Eugenia didn’t see many blue boys in the course of a day, but she often saw mothers with the hysterical air of a woman ill-prepared to domesticate the species of wild animal known as an eight-year-old boy.” But while Marmaduke made me laugh with delight, it was Otis and Lizzie who captured my heart. Eloisa does a remarkable job of bringing these two emotionally wounded but valiantly brave children to life, sensitively addressing the heartbreak they’ve faced while also infusing them with the irrepressible spirit and inherent mischief of children that age. In short, she creates real children with real issues to whom most everyone can relate. And who better to help Lizzie and Otis come to terms with the past and forge a new future than Ward and Eugenia, two adults who are both allowing their past experiences to keep them from moving forward?

Janga: Oh, I love that wedding analogy, PJ. It makes the point about different, but equally valid-- and rewarding--reads beautifully. And, yes, I totally agree that Eloisa does an exceptional job of creating child characters. I’ll vote for third-generation stories, especially if Rose from Three Weeks with Lady X joins Lizzie and Otis. There are other qualities I always look for in an Eloisa James romance as well. One is literary allusions. I loved Lizzie and Eugenia’s play-quoting scenes. I always look for at least one character name that makes me giggle: it was the loathsome Gumwater in Seven Minutes. Another is a feminist sensibility that never seems anachronistic. One of my favorite scenes in Seven Minutes was the conversation between Eugenia and her friend and assistant Susan. (What a wonderful character Susan is!) I appreciated Eugenia’s acknowledgement that if she remarried she stood to lose everything:

The moment I turned from the altar my husband would own Snowe’s. He would own my inheritance from my mother, the dowry my father gave me, and Andrew’s settlement. He would own the house that Andrew bought for our marriage.

Her words are a reminder of just how vulnerable married women were under coverture. But my favorite moment came when Eugenia conquers her fear of water and saves Otis and herself from drowning. She may whisper “I saved myself,” but the reader knows her whisper is really a cry of triumph. Not only does it address her guilt over Andrew’s losing his life to save her from drowning, but it also suggests her understanding that she can survive on her own. She loves Ward and longs for him to return her love, but if he doesn’t she can survive physically, economically, and emotionally on her own. You go, girl! Sorry. I got carried away by my enthusiasm for a book that celebrates romantic love and a woman’s independence. What do you expect from an Eloisa James book, PJ? 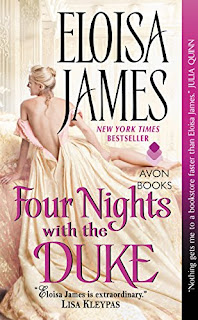 PJ: My expectations are similar, Janga. I expect intelligent writing and intelligent characters, humor, complexity, sexy times, sensitive times, heartrending black moments, grand gestures, and, need I say it, a bare-the-soul, relationship-saving grovel. Because, let’s face it, in Eloisa’s books, the hero usually has done something to necessitate a good grovel. Eloisa has written some epically heartbreaking black moments and the one in this book is no less than what I’ve come to expect. This pivotal “black moment” concerns Ward’s actions and had me telling Eugenia (Yes, I do talk to fictional book characters. Doesn’t everyone?) to walk away and find someone more deserving of her love. It’s a testament to Eloisa’s skill in creating fully-dimensional, multi-layered, realistic characters that I felt Eugenia’s heartbreak as if it were my own and that I wanted to string Ward up by his unmentionables for hurting her. But in true Eloisa James fashion, she knew exactly what Ward needed to do to convince Eugenia – and me – that he deserved a second chance. It’s that afore-mentioned, bare-the-soul gesture and grovel that she writes so well. Though, for me, it wasn’t the over-the-top, grand gesture recommended by his friends that cinched the deal but the small, from-the-heart one that validated the fact that he, finally and completely, loved, accepted, and appreciated all the parts of this unique and complex woman who owned his heart. Okay, to be honest, I wouldn’t have minded a bit more groveling. Eugenia deserved it for what he put her through but his gesture and his words were nicely done and from the heart. It was enough for Eugenia and that’s good enough for me. 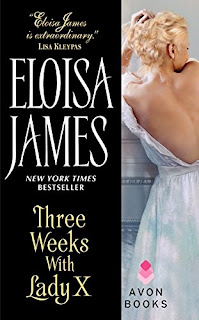 Janga: Oh, I do love a good grovel, and I agree that Ward needed to grovel. I too wanted to shake him at times, even though I adored him. However, even when I abhorred his behavior, I understood why he acted as he did. Despite his father and Roberta’s love, his illegitimacy scarred him as did his knowledge of his mother. Part of the joy of reading a series is the sense that I know the characters with a depth I rarely get in standalones. That is especially true of Eloisa’s ensemble romances, among which are the original six Desperate Duchesses novels. Thus, in addition to my affectionate engagement with Eugenia and Ward, I also loved that Villiers is still setting women’s pulses fluttering and that Poppy and Fletch have irrepressible children. Overall, I loved this book! It was another five-star Eloisa James keeper for me. I know I will be rereading it again and again. Now I am eagerly awaiting the free short story that will introduce a new series. That’s another thing about EJ’s books: beginning a series, concluding a series, or falling somewhere between, they always leave me anticipating the next one.

If you're interested in reading the original Desperate Duchesses series, those books (in order) are: Desperate Duchesses, An Affair Before Christmas, Duchess by Night, When the Duke Returns, This Duchess of Mine, and A Duke Of Her Own.


Are you a series addict like Janga and I are or do you prefer standalone books?

Do you enjoy second (or third) generation stories?

Have you read Seven Minutes in Heaven yet? What did you think?

One randomly chosen person leaving a comment on this post will receive an autographed print copy of Seven Minutes in Heaven. Deadline for comments to be entered in the giveaway is 11:00 PM, February 7, 2017. (U.S./Canada addresses only)


As you can see, we've chosen a name for our new feature. While the suggestions everyone submitted were all wonderful, the one we chose came from another source. So, because we didn't choose one of your names, I've randomly chosen one person who left a suggestion to receive the package of books and that person is Lynda P. Congratulations, Lynda! Please send your full name and mailing address to us at: theromancedish (at) gmail (dot) com.