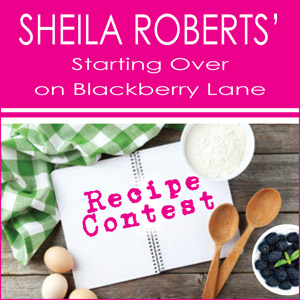 With the blog name, “The Romance Dish,” Sheila Roberts figures there must be some mighty fine cooks among all you Dishers out there. And mighty fine cooks have scrumptious recipes. Sheila invites you to share one of those (or two or three or four) in her fun Sheila Roberts STARTING OVER ON BLACKBERRY LANE Recipe Contest. The grand prize winner’s reward: a complete set of Rachael Ray pots and pans worth about $150 (and a signed copy of her new book!). 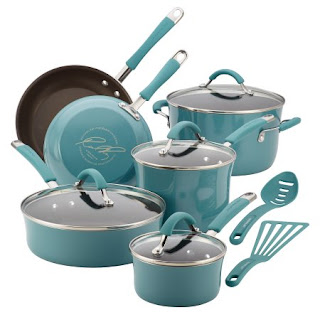 Sheila thought up this fun contest to promote that book, her light-hearted February 28 Icicle Falls novel, which is filled with fabulous foods, a chef, a baker, a cook-off, a food photographer and a resident Icicle who’s publishing a cookbook of her late mom’s yummy recipes. Being a foodie herself, Sheila just can’t resist writing about food. Or sampling it. And she’s eager to sample your recipes.

To enter, simply go to bit.ly/2lxE3HI and share your recipe. Be sure to say The Romance Dish sent you so the site can also win something—a complete signed set of Sheila’s Icicle Falls series. If we win the set, we’ll think up something creative to do with it here on The Romance Dish. The deadline to enter is 11:59 p.m. Friday, March 10.

Something fun about Sheila’s recipe contest: after her panel of judges picks five finalist recipes, you readers will vote to select the grand prizewinner! BTW, there are two recipe categories, main dish and desserts, and recipes must be original. That is, not previously published in a cookbook or otherwise copyrighted. You know, the kind your momma taught you, or you combined this with that and came up with a dish your family and friends beg you to make. 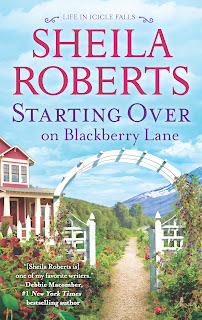 STARTING OVER ON BLACKBERRY LANE

Three friends, all in desperate need of a guy who knows his way around a toolbox, decide to pool their resources so they can be the highest bidders for a repair package donated by new handyman-about-town Grant Masters at Icicle Falls’ Raise the Roof bake-off fundraiser. Not only is Grant one heck of a good guy with a hammer, he is also oh-so-easy on the eyes. Well, the three friends win that auction, and being the gentleman that he is, the Honey Do man decides, what the heck? He’ll help out all three ladies with their home repair projects. Which creates some fun moments and sends hearts a-pounding. To find out where Grant eventually parks his toolbox, of course, you’ve got to read the book, which is available right now for pre-order.

You can reach Sheila on www.sheilasplace.com and on Facebook.

Have you discovered Sheila Roberts' humorous and heartwarming Icicle Falls books yet?

Do you have a recipe to enter into the contest?

Wouldn't you love that gorgeous set of pans? I would! I love that color!