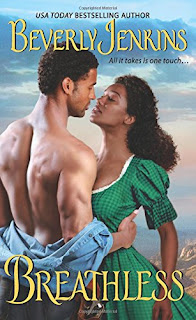 First, a confession: I’m an ignorant twit. I avoided Beverly Jenkins’ historicals before because in my head I couldn’t imagine a HEA for a black couple prior to, oh, 1965. This is due to, I’m sure, partly to my education where we studied the Civil War and Jim Crow and the Civil Rights Act, but as anyone knows in today’s political climate, our education system leaves much to be desired on what is actually true. Yes, we did have a Civil War; and yes, we’re still a racist society. However as there is truth in that everyone has a hard time in life, it is also true we all experience happiness. There is always hope; there is always love; there is always change toward our better selves and a better society.


That said, I received an ARC of Breathless and was completely intrigued by the premise. The heroine, Portia Carmichael is a hotel manager in Arizona Territory, thriving in a world where she has stability and respect (which she did not have as a child), when a family friend, Kent Randolph comes back into her life. Kent Randolph is a drifter, but now has drifted back home and upon spying the beautiful Portia, who he always called Duchess, believes his drifting days are over, if only he can convince her to stake some roots with him. Portia’s dark childhood still haunts her and she does not want to marry and put her control at the whim of any man, not even a man as tempting and kind as Kent.


And Kent is tempting. He’s a tall drink of water, all things sexy and a little flirty, but also very gentlemanly and respectful, and a little dangerous. I was willing to run off with Kent far faster than Portia was willing to, but Kent is a patient guy. He doesn’t rush her and it’s clear he respects her and wants to forge a relationship that will last. Portia is a heroine to root for--she can’t cook but she can help roof a house, do bookkeeping, and patiently serve the most vile and obnoxious customer in a diplomatic way. She’s smart, passionate, and loving--and it’s easy to see why Kent is determined to win her. She is an equal partner in every way.


Portia’s Uncle Rhine owns the hotel where he partners with a local ranch for a “dude ranch excursion” for guests who come from the city and want to experience the West. The owner of the dude ranch passes away and Rhine purchases the ranch so he can continue the operation. Kent is assigned to run the ranch and he moves there to begin renovations that have been put off due to the previous owner’s age. Meanwhile, some guests from San Francisco come for the dude ranch experience, and Portia, who already has a couple young men in town who are vying for her attention, also has to deal with a matchmaking mama and her son.


There’s some excitement--which I don’t want to expound on because I don’t want to give too much away; however, I love how Ms. Jenkins’ handled the various characters and their interactions with each other. You will definitely be rooting for Portia when she puts these people in their place. There’s societal politics and snobbishness as well as racial and historical issues that were shared in an interesting and informative manner, which added to the depth of the characters who were navigating in a world set with those issue restrictions.


I loved the sibling relationship. Regan is the younger sister, but also the wild one, and when Portia, who has avoided men altogether all this time, finally decides she would like a little one-on-one time with Kent, she first goes to her Aunt Eddy, who while conservative, answers her questions and sends her to talk to Regan, who had asked for the talk some years before. Regan is very informative and playful, but at the same time, being matter-of-fact and honest, there is also caution and how to protect yourself when you’re an unmarried woman who wants to have sex. (I never want to hear another excuse from a contemporary novel about the awkwardness of working in contraception into their scenes. Ms. Jenkins did it beautifully and totally didn’t have to.)


I love how Ms. Jenkins made the story sensual and sexy, her characters not at all prudish, but also made them behave as would be likely in the setting they were. It gives me hope for romance novels--especially modern historicals--that allow for love scenes to happen naturally to the characters and time period.
I can’t wait to read Regan’s story--she is going to be much less conventional than her sister. Now, I need to go and write this title on my list of 2017 Favorites. It’s going on the list!