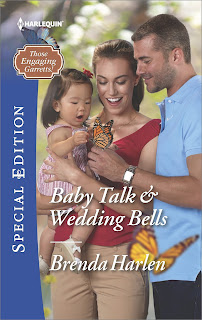 Widowed for a year, CEO Braden Garrett is determined that he will be the father that his adopted daughter, fifteen-month-old Saige, needs, but he feels guilty that he is not providing the two-parent home his daughter’s birth mother wanted for her. His mother, whose help in caring for Saige is invaluable, is certainly doing her part to encourage him to remarry and give Saige a mother. But Braden remains uninterested until his mother suffers a dental emergency that requires Braden to fill in for her at the weekly Baby Talk class. There he meets Cassie MacKinnon, the librarian in charge of Baby Talk. Captivated by her beauty, he tries to charm her, but she turns down his invitation for coffee, although she shows signs of sharing the attraction.

Cassie is not immune to Braden’s appeal, but she is convinced that he is out of her league. She has lost enough throughout her life to be cautious of emotional risks. Her distant father was killed in battle, her younger sister drowned, her alcoholic mother was struck and killed by a car, and her hypocritical step-father was verbally and physically abusive. When she thought that she had met the man with whom she would create a family of her own, she realized that he was trying to turn her into a clone of his ex-wife with whom he was still in love. That broken engagement convinced Cassie that she was better off alone than with someone who didn’t really love her. She has found a degree of contentment in a job she finds fulfilling and in her small, book-filled house which she shares with two rescue cats, Wesley and Buttercup.

But Braden is persistent, and the HEA Cassie has dreamed of with this sexy single father and his adorable daughter is almost within her grasp when she learns that Braden sees her not as the love of his life but as the perfect mother for his child. Braden may be slow to realize how he feels, but losing Cassie is a wake-up call. Can he persuade her that they belong together?

Baby Talk & Wedding Bells is the eleventh book in Brenda Harlen’s long-running series, Those Engaging Garretts, and it offers the same mix of swoon-worthy heroes, independent heroines, and unlikely matches—usually with credibly cute kids as a plus—that has made the series so popular. I’ve been following the romantic adventures of the Garretts since the first book, From Neighbors . . . To Newlyweds (2013), and I have what I am guessing is the last in the series, The Last Single Garrett, on my TBR list for April. The extended Garrett clan has become one of my favorite fictional families.

Baby Talk & Wedding Bells is a sweet read with engaging characters, an emphasis on family dynamics (past and present), and emotional punch—just the kind of book that makes Harlen a favorite author. Not only did Cassie and Braden have me rooting for them immediately, but I also found the secondary characters appealing, particularly sweet Saige, Braden’s benevolently interfering mother, and Cassie’s mentor, Miss Houlahan with her once and future beau.


If you are a reader who enjoys these qualities in the romances you read, I recommend this one. But don’t complain if you end up adding another eleven titles to your TBR list.