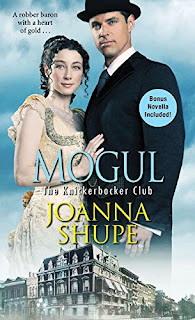 Calvin Cabot is a reporter for the New York Bugle when he meets Lillian Davis, daughter of a wealthy mine owner. Two months later, Calvin and Lily, passionately in love, elope. Three weeks into their honeymoon, Lily’s father tracks them down and bullies and blackmails Calvin into abandoning Lily, who refuses to believe that Calvin will not return for her. When denial becomes impossible, she agrees to her father’s insistence that the marriage be annulled. Four years bring significant changes. Lily, still harboring resentment against the man who was briefly her husband, has become president of the Davies Mining Company after her father’s death. Calvin, owner and publisher of three newspapers, has become a powerful and somewhat mysterious figure with a reputation for ruthlessness. Neither has remarried, although Lily is on the verge of a betrothal to a man from her own class.

When Lily receives a threatening letter, it becomes imperative that she find her younger brother, Tom, who is inexplicably missing. She is forced to seek help from Calvin. When her letters to him are ignored and he avoids her visits to his office, she hires Pinkerton agents to locate and kidnap him. Despite these strong-arm tactics, Calvin is not interested in helping Lily. It is not until he discovers that Tom has earned the enmity of Wah Lee, a Chinese mob boss whose dangerous reach Calvin knows well, that the newspaperman reluctantly agrees to Lily’s request (demand).  What follows is part action-adventure in which the dangers are real and the risks high on multiple levels and part second-chance-at-love tale in which the chemistry between Calvin and Lily proves to be as explosive as it was when they were young lovers with their illusions intact.

Mogul is the third novel in Shupe’s Knickerbocker Club series (after Baron and Magnate), and it has the most exciting plot of the series. I confess that I was hooked on this story from the first sentence: “She never expected to find her former husband in an opium den.” A kidnapping and flying bullets before the end of the second chapter ensured that interest continued. Lily is a strong heroine who refuses to be relegated professionally or personally into the narrow role convention defined as a woman’s place. I have a long-standing weakness for self-made heroes and Shupe gives her readers a captivating example of that trope in Calvin. His stubbornness equals Lily’s, but he respects who she is in her own right. Secondary characters, including Tom and his love interest and Calvin’s closest friend, Hugo, an African American, and his Chinese wife, add interest and provide greater diversity than one usually encounters in historical romance.

Shupe brings to life not only the glitz, glamour, and powerful self-made men of Gilded Age New York but also gender issues of the period and lesser known and heinous bits of American history surrounding the Chinese Exclusion Act of 1892 and the violence, isolation and discrimination associated with it. Fans of the series will be pleased to see Calvin’s story, but the book also works well as a standalone. If you like a fast-paced story and highly sensual romance, this book is for you. Tycoon, the novella that introduced the series, is included as a bonus read in the ARC, and I assume it will also be included with the book for purchase. Lighter in tone than Mogul, it is also an entertaining read. I loved it.

I find the Gilded Age immensely interesting, teaching Edith Wharton and Henry James provided some of my favorite moments in the classroom, and I expressed the hope years ago that someone would set a romance novel in this period. I continue to be excited about the stories in this period that Shupe is giving readers. Magnate is my favorite, but all the novels and the novella have been engaging reads. I give Mogul my enthusiastic recommendation.


According to reports, Shupe has contracted for three more novels in the Knickerbocker Club series. I applaud this news and eagerly await the next release.