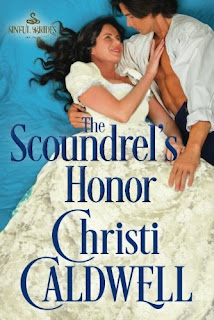 The Scoundrel’s Honor by Christi Caldwell was a solid five out of five stars for me. It tells the story or Penelope Tidemore and Ryker Black. On the surface, you would never imagine these two people crossing paths but cross they do and unconventional doesn’t even begin to describe their romance.

Penelope is the last great hope of her family for a scandal free season, courtship and marriage. That’s not to say the Tidemores are an evil lot or that they throw themselves into the midst of the Ton with any intent of finding themselves in compromising after compromising situations no less than three times...it just seems to happen. Penelope or Penny is the sensible one. She has molded herself into a young lady who knows how to comport herself in any ball, musicale or picnic the Ton holds. She’d show them.

Ryker Black would rather be caught dead then deal with any of that. He’s too busy for that anyway. The bastard son of a duke he has little time and no patience for simpering lords and ladies. His own father and faithless mother threw him into the streets of St. Giles where he survived by his wits and wiles. It was there that he honed his skills as a survivor and leader of his own mismatched family. A sister he rescued from that hell and a band of three others who were as brothers to him. The only time he tolerates lords are when they are gambling, drinking or whoring at his gambling den the Hell & Sin.

His first foray into polite society collides with Penelope’s when they both attend his sister, now the Duchess of Somerset’s ball. An innocent collision that sets in motion what becomes a great romance. Duty bound, they wed. Duty bound, she moves from the safe haven of her home and family to Ryker’s home and headquarters at The Hell and Sin. It is a huge adjustment for both. Penelope is headstrong and brokes no quarter. Ryker is equally stubborn but his is borne from a life hardened by experiences no man, let alone a child should have to endure. Those same forces follow him into adulthood and as much as he protects his own,which now includes Penelope, he must protect himself against everything and everyone.

I really loved this book. It is the second in Christi Caldwell’s Sinful Bride series. The story is compelling and endearing. The grand gesture at the end: pure romance happily ever after. Penelope and Ryker have quite a bit going against them as neither were prepared for the emotional impact their attraction would have on them. I would say they were not prepared for the viciousness of their enemies, be they harpies of the ton or cold blooded, soulless enemies of the club itself. What also makes this such a great read for me are the secondary characters in the book. Penelope’s sisters, brother and mother are stellar. Equally so are Ryker’s family, the brothers who banded together as children to survive the streets and his blood sister who he rescued from the streets and who found her happily ever after with a duke no less.