Review - - Starting Over on Blackberry Lane 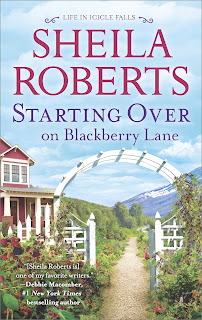 Sheila Roberts takes readers back to Icicle Falls for the tenth time in her newest novel. Three friends are confronted with challenges that prove small-town life can be far from idyllic. Cass Wilkes, whom fans of the series will remember as a lead character in Merry Ex-Mas, Book 2 in the series, returns. In the earlier book, Cass had to deal with hosting her ex and his trophy wife for the wedding of their daughter, who wanted her father to give her away. Several years have passed since that time. Daughter Danielle has made Cass a grandmother, and Cass’s other two children are college students. The Gingerbread Haus bakery still keeps Cass busy, but not busy enough to remain unaware of how lonely she has become now that her children are leading their own lives. Of more immediate concern is her house, which is literally falling to bits, or at least bits of dining room ceiling are falling on her heirloom table.

Cass’s friend Stefanie Stahl is also having house problems. Her husband is a master of thinking up ways to improve their house. The problem is his vision exceeds his skill, and although he begins each project with enthusiasm, he soon runs into a something he can’t handle and leaves the project unfinished. Stef’s frustration with her unhandy handyman reaches the no-tolerance point when he tears down a connecting—and load-bearing—wall the day she is hosting a bridal shower for her friend Griffin James.

At the shower, Griffin decides that she no longer wants to be a bride. She dumps her fiancé and starts prepping her house for sale. She has decided to leave Icicle Falls for New York City where her career opportunities as a food photographer will be greater. When she falls off a ladder while painting, it becomes clear that she needs help to get the house ready to show to prospective buyers.

Widower Grant Masters found that his dream life after retirement was not so dreamy after all. In fact, it was boring. He has returned to Icicle Falls to be near his two sons: expectant father Dan, who took over Masters Construction when Grant retired and is married to the former Charley Albach (Merry Ex-Mas), and Brad, a chef in nearby Seattle. Because he wants to work again, Grant starts a one-man, general handyman company that he names Honey Do. When he offers his services for one day at a fund-raising auction, Cass, Stef, and Griffin join forces to win the bid. The intersection of their lives with Grant’s brings changes to all their the lives. Stef’s determination to have Grant complete all her husband’s unfinished projects jeopardizes the things she values most, meeting Brad Masters makes Griffin second-guess her choices, and Cass must decide if a George Clooney lookalike who is inspiring x-rated dreams is worth risking her heart.

I’ve read all ten of Sheila Roberts’s Icicle Falls novels and the two novellas. Overall, I rank the series as a good one, but I have found the books a bit uneven. None is a bad read, but I like some much better than others. Starting Over on Blackberry Lane is one of the best. I like the way Roberts gives her readers bits of her characters’ lives at different stages. Cass was my favorite character--in part because I found her engaging in Merry Ex-Mas and enjoyed seeing her again and in part because I am in favor of seeing over-forty heroines find an HEA. I also liked the other leads. I admired Griffin’s courage in making some tough choices, and I found her profession interesting. I admit I found Stef irritating and self-centered at times, but I also found her movingly human once she realized her error.

The book is as much women’s fiction as it is romance, and I particularly appreciated that the three women have close, supportive friendships even though they are at different places in their lives. I loved seeing more of Charley and Dan, who are among my favorites in this long-running series. And I adored Grant! I think Roberts tapped into the fantasies of many of her readers when she created a hero who excels at superbly taking care of a honey-do list and looks like a former sexiest man alive.

As always, Roberts’s trademark humor made me smile. If you are looking for a feel-good read that is a splendid example of a women’s fiction-romance hybrid on the light-hearted end of that spectrum, I think you will enjoy this book.  I for one am ready for my next trip to Icicle Falls. Another Icicle Falls Christmas book is scheduled for release in late October, and it is on my list.