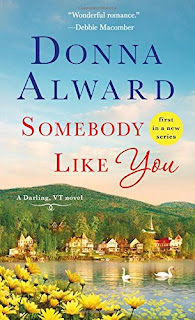 Where do you go when your life has changed in ways that make it awkward and damaging to your self-esteem to try going on as if the changes are insignificant. If you are Laurel Stone, an employee in the same accounting firm that employs your recently uncloseted ex and his lover, a partner in said firm, you return to your hometown, Darling, Vermont, a New England town where everyone knows your name and most of your business, and you open a gardening center, hoping to find emotional satisfaction as well as economic success in your new business. Laurel is still sensitive to her recent divorce and the circumstances surrounding it making her the focus of gossip, but her business is going well. She has reconnected with Willow Dunaway, an old friend from high school, and life seems promising. Her confidence in that promise is shaken when her gardening center is the target of vandalism. Her stress grows when the investigating officer is Aiden Gallagher with whom Laurel has a long history. One particularly memorable bit involves a milkshake she dumped on him.

Aiden is no longer the immature kid who behaved like a jerk back in high school, but he knows Laurel may not be ready to believe he has changed. He doesn’t really expect her to be pleased to see him. He regrets that he hurt Laurel and would like to apologize for his immature behavior. When he sees Laurel and is reminded of all the reasons he once liked her, he is even more determined to make amends for the past. However, he is wise enough now to know that he has to move slowly.

Laurel, reluctant though she may be to admit it, also acknowledges that the attraction between them is still strong. She remains wary, however, and when she is approached about reenacting the iconic pose captured in Darling’s famous tourism photo (two five-year-olds, dressed for their parts as flower girl and ring-bearer in a wedding, kissing at the town’s Kissing Bridge where, according to legend, a kiss guarantees a forever love), she refuses. But as she spends more time with Aiden and discovers the kind of man he has become, her defenses weaken. Perhaps a new photo at Kissing Bridge is not a bad idea; perhaps that old legend is more than a tale for tourists.

Donna Alward is among the best at creating small towns that have the requisite quirkiness without losing authenticity. With Somebody Like You, she introduces her readers to a new series but one that has the same heartwarming appeal that made her Jewell Cove series a favorite with readers. The covers of the Darling, Vermont series are enough to make some readers fall in love with town, and the novel reveals a town that lives up to that impression.

Alward also takes common tropes of romance and gives them twists that make them feel fresh. The heroine’s returning home after a shattering divorce serves as the beginning of many a romance, but Laurel’s situation is more fraught than the typical case. The lingering effects of high school heartbreak is another much-used device, but Aiden has neither forgotten his actions nor does he avoid accepting responsibility for them. I found both Laurel and Aiden likable and sympathetic from the get-go, and I award major kudos to Alward for letting their relationship develop credibly rather than rushing to consummation. The love scenes include the sweet, the tender, and the sizzling plus a golf-course scene that is giggle-inducing.

Secondary characters are also important in small-town romances, and Alward gives her readers a cast designed to win hearts and pique interest. Willow Dunaway, Laurel’s bestie, is a delight with hints of depths readers will be eager to see explored in a later book. Aiden’s large, lively, loving family includes enough unattached siblings to keep the series going and readers intrigued for quite a while. George, Darling’s homeless man, serves not only to reveal the kind of man Aiden is but also to impress the reader with his humanity and dignity.

If you are a fan of small-town romance, I recommend you add this one to your list. I think you will be as eager as I am to pay a return visit to Darling, Vermont. Lucky for us, we don’t have to wait long. Someone to Love, the story of Willow and Aiden’s brother Ethan, will be released March 7, and Somebody’s Baby, a third book, with another Gallagher hero, releases April 4. I do love back-to-back releases.

While bestselling author Donna Alward was busy studying Austen, Eliot and Shakespeare, she was also losing herself in the breathtaking stories created by romance novelists like LaVyrle Spencer, Judith McNaught, and Nora Roberts. Several years after completing her degree she decided to write a romance of her own and it was true love! Five years and ten manuscripts later she sold her first book and launched a new career. While her heartwarming stories of love, hope, and homecoming have been translated into several languages, hit bestseller lists and won awards, her very favorite thing is when she hears from happy readers!
Donna lives on Canada’s east coast with her family which includes a husband, a couple of kids, a senior dog and two crazy cats. When she’s not writing she enjoys reading (of course!), knitting, gardening, cooking…and is a Masterpiece Theater addict.