On Second Thought - - When He Was Wicked

When He Was Wicked (with Second Epilogue)
By Julia Quinn
Publisher: Avon
Release Date: February 28, 2017
(originally published by Avon in 2004) 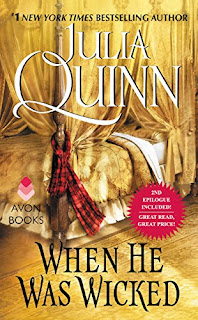 Michael Stirling is known as the Merry Rake by those who see only his light-hearted persona and the long list of women whom he has charmed without once falling in love. What observers do not understand is that Michael Stirling is a man consumed by guilt because the only time he fell in love was at his first sight of Francesca Bridgerton, thirty-six hours before she became the bride of his first cousin, John Stirling, Earl of Kilmartin. For two years, John and Francesca have been blissfully happy as man and wife, and Michael, who looks upon John as a brother, has remained hopelessly and guiltily in love with his cousin’s wife.

Francesca, more reserved than her Bridgerton siblings, had felt from her first meeting with John that he was her perfect complement. Two years of marriage have strengthened that feeling. Francesca is also excessively fond of Michael, whom she views as her closest friend next to John. She values his loyalty to John, and he makes her laugh. She would love to see him settled and happily married and has even entertained the idea of a match between him and her sister Eloise. She has no inkling of Michael’s real feelings for her.

Everything changes one evening when John, plagued by a headache, lies down to take a nap. He never awakens. Francesca is devastated. So is Michael, but his guilt is even heavier than when John was alive. He cannot be the friend Francesca needs, and he flees to India, leaving his cousin’s twenty-two-year-old widow to deal with her grief and manage the Kilmartin estate.

Four years bring changes to both Francesca and Michael. Although Francesca still grieves for John, she has adapted to widowhood. She enjoys the responsibilities of being the Countess of Kilmartin, and both her family and John’s provide love and companionship. But her nieces and nephews remind her of what she wants most—a child. So, she puts off her half-mourning and leaves Scotland early for London where she plans to find a husband. Michael is grateful for the balance and maturity his years in India have brought him, but he is weary of the life there and ready at last to assume the responsibilities of the earldom.

Despite the changes, Michael is still in love with Francesca, and she is still oblivious to his feelings. Francesca felt abandoned by Michael’s leaving when she needed him most, but she is eager to see him restored to the position of close friend and confidante. However, it soon becomes clear to her that her feelings for Michael have also changed. She no longer sees him as merely a friend; she is newly aware of him as a man. And if the idea of a sensible remarriage induces guilt over losing her identity as John’s wife, seeing her relationship with Michael as anything other than familial and platonic is terrifying.

As for Michael, the torment of being a friend to Francesca, wife of his cousin, is mild compared to the guilt and regret that nearly overwhelms him now and to the knowledge that he cannot act on his feelings but must stand by and watch her marry another man.

It shouldn’t have surprised him. And yet it did. Every time he thought he knew everything about her, had unwillingly memorized every last detail, something inside her flickered and changed, and he felt himself falling anew.

Or worse, that he had wished for this. That he had wanted John gone and out of the way, wanted the title and Francesca and everything else.

With the tension between them at such a fever pitch, it is inevitable that it shatter. And it does in a scene that has Francesca running away to Scotland. Michael, with the blessing of Colin Bridgerton, who offers him the excuse of his own very recent engagement as reason to pay a visit to the place both Michael and John considered home, follows her to Scotland. But Michael and Francesca must come to terms with their feelings about John separately before they can claim their own HEA.

When He Was Wicked is the sixth book in Julia Quinn’s beloved Bridgerton series. With John’s death at twenty-eight playing such a significant part, it is hardly surprising that it is the darkest of the eight-book series. More surprising, since the big kiss scene that changes the direction of the book occurs more than half way into the story, it is also one of the author’s most sensual books. When I first read it, even though I exceeded the two-hanky warning while reading it, I ranked it below the first four books in the series on my list of Quinn favorites. It seemed to me that it started a new piece of music rather than offering a new movement in the Bridgerton symphony. I liked it, but I didn’t love it.

Then, several years before The Bridgertons: Happily Ever After (2013), a compilation of all eight Bridgerton second epilogues plus the bonus story of Violet, the Bridgerton matriarch, was released, I read the second epilogue for When He Was Wicked. It became one of my favorite epilogues ever and one of my Julia Quinn favorites, and When He was Wicked  jumped to a place only slightly below The Duke and I and Romancing Mr. Bridgerton among my best loved and most reread Julia Quinn books. Even though I own print and digital copies of the novel and of the epilogue collection, I am excited about the new release that has the novel and the second epilogue together. Next time I need reminding that heartbreak can lead to an unexpected HEA and that even HEAs may include a few bumps along the way, I will have the full story together.


If you have never read Julia Quinn’s Bridgerton series, I highly recommend them, particularly for readers who delight in Regency romps that are more than mere froth. And if you think Julia Quinn has written only Regency romps, I suggest you read When He Was Wicked. I recommend it with great enthusiasm, with a smile on my face and a tear in my eye.

Email ThisBlogThis!Share to TwitterShare to FacebookShare to Pinterest
Labels: 5 Star Review, Janga, Julia Quinn, On Second Thought, When He Was Wicked