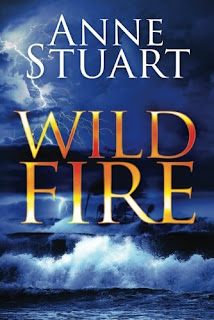 I remember years ago being one of the first people to see the movie “Silence of the Lambs.” As I stood in line at the West 57th Street movie theater in Manhattan, I realized I didn’t know anything about the movie I was about to see.  But I couldn’t resist a film starring Anthony Hopkins and Jodie Foster.  To say I was a little terrified while watching the film would be a major understatement.  The truth is, for most of the movie, I sat in that dark theatre with my hands over my eyes silently humming to myself in an effort to drown out every horrible, word and sound uttered by Hannibal Lecter, sounds I knew would haunt my dreams

Reading Wildfire, was much like watching “Silence of the Lambs.” While these two stories are NOTHING alike, they do have one point in common, both prominently feature sociopaths.  Anne Stuart knows how to turn up the volume on suspense by creating one crazy psycho who does unspeakable things, and as I’ve indicated, I’m a bit squeamish when it comes to things like that. Because reading requires you to keep your eyes open, I was unable to avoid the sections in Wildfire where the sociopath displays his horrors.

The heroine, Sophie Jordan, is an undercover agent for The Committee, her mission is to find and destroy a drug, that if used, would wipe out whole populations.  Financing the drug is billionaire and vicious, psychopathic crazy man Archer MacDonald - her target.  But Sophie’s mission doesn’t go as planned when she falls in love and betrays The Committee by marrying Archer.  Unfortunately, Archer soon discovers she’s an undercover agent and orders her killed. Sophie is shot in the spine and instead of dying becomes paralyzed and for three years is a prisoner on Archer’s island compound subject to his sadistic whims.

The Committee finally preps another operative - enter tough guy hero, Malcom Gunnison. His mission is to get the drug, kill Archer and if necessary kill Sophie too.  After all, she betrayed The Committee by falling in love with Archer.

With the introduction of Malcom comes the internal/external conflict of trust.  It’s clear no one trusts Archer, but can Malcom and Sophie trust each other?

There is no doubt that Anne Stuart can write and can tell a story, but there were some things that just didn’t work for me.  In the end, here’s my analysis of Wildfire:

PROS:
The antagonist was well crafted.  His every move showed he was pond scum through and through.

For those readers who like their suspense taught like a violin string, they’ll love this one.  It’s high tension throughout.

If you’re a romance reader who enjoys hot sex scenes, this one gets a 10 out of 10.

Who doesn’t love an ending that is sigh worthy.  Check, this one hits the mark.

There was too much inner voice and dense paragraphs used to move the story along.  That was a disappointment, because toward the end, where dialogue was used, it was strong.  There was wit, humor and urgency in the dialogue and I’d wished I would have seen more of that in the beginning of the book.

The hero and heroine went back and forth with their inner voices on how they felt.  Why they shouldn’t feel a certain way.  What they did or didn’t deserve.  It flips and flops all over the place and was sometimes tedious taking me out of the story.

I believe, if you’re a romance reader you need to be able to suspend belief, after all, that’s half the fun of reading romance.  However, in this book, there were sections that were a bit too unbelievable.

In the end, this wasn’t a book for me.  But I believe if you enjoy romantic suspense, you like your romances steamy, and your heroines tough, then this is a book for you.

What is the one thing in a romance book that will make you say, “Nah, that’s really not believable?”