Review - - Someone to Hold 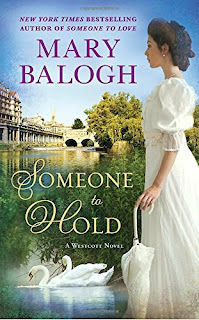 With the revelation of her father’s bigamous marriage to her mother, Camille Westover lost her identity as Lady Camille Westcott, her status in society as the eldest daughter of an earl, and her well-ordered world. She also lost her fiancé who had no intention of allying himself with the bastard daughter of a disgraced aristocrat; she even lost the comfort of her mother who left Camille and her younger sister Abigail with their maternal grandmother in Bath when she retreated to her brother’s country vicarage. Several months later, Camille has arrived at a hard-won acceptance of who she is not, but she has yet to determine who she is. In her search for answers to unanswerable questions, she is drawn to the orphanage where her half-sister, the Duchess of Netherby , née Lady Anastasia Westcott, spent most of her life as Anna Snow, first as one of the orphans and later as a teacher. What begins as a visit to the orphanage ends with Camille being granted a two-week trial as a teacher in the orphanage school, the very job Anna once filled.

Joel Cunningham’s life has also changed. He has left his days as a struggling artist behind him and is enjoying considerable success as a painter of portraits. A larger income has allowed him to move into a more commodious set of rooms and to be more selective about the commissions he accepts. However, he refuses to give up the two days a week that he volunteers to teach art at the orphanage school. He views his time with these students as a mission as much about fostering their imagination and power to dream as about art. Even in the absence of Anna Snow, his friend during the years they were growing up together in the orphanage and later the woman he loved, he remains committed to the orphans. He is not pleased to learn that Camille has taken the teaching position. Despite interactions with the children that suggest she is less rigid and humorless than he thought, Joel cannot excuse her arrogance or her unkindness to his dear Anna.

Although Camille and Joel clash at first, in part because each clings to misperceptions of the other, closer acquaintance reveals their errors and stirs an attraction that grows as they spend more time together. But baggage from their separate pasts must be dealt with before these two can claim their deserved HEA.

Someone to Hold is the second book in Mary Balogh’s Westcott series, and this beloved author proves once again that even after more than three decades and more than eighty novels, she remains a gifted teller of tales whose characters are engaging and memorable. I admit that I have a particular affection for redeemed heroines, and that doubtless is one reason I found this book a most rewarding read. Camille appeared to be arrogant and superior in Someone to Love, but in this book, Balogh uncovers layers that reveal the eldest of the three delegitimatized Westcotts as a flawed woman but nevertheless one with strength, integrity, and a capacity for growth. Even her coldness toward the sunny, open-hearted Anna becomes easier to forgive when Camille acknowledges to herself that her response to Anna is irrational and emotional and that Anna has behaved graciously.

Joel too is revealed as a more complex character in this novel than he appeared to be in the first. The story of his past that is unraveled might have seemed a too easy parallel to Anna’s story had Balogh not prepared her readers by having the orphanage in which Anna and Joel were brought up one where the children are supported by anonymous benefactors. Joel’s tangled family relationships also give him and Camille something in common as they both deal with challenges to who they thought they were and to their concepts of what makes a family.

Readers who enjoyed the first book will be pleased to see various members of the Westcott family appear in this one, and the orphans are even more appealing and play a more significant role in the story. I liked the first book, but I think the second is even better. I highly recommend it. Although Someone to Hold may be read as a standalone, readers will have a more satisfying reading experience and a better understanding of Balogh’s world-building if they read Someone to Love as well.

If you have never read Balogh, you owe it to yourself to read one of the classic writers of Regency-set historical romance. If you are a Balogh reader, you will find yourself hooked on yet another Balogh family, immersed in the new book and eager for the next. That next book will be Someone to Wed (November, 2017), the story of Alexander Westcott, the new Earl of Riverdale, and his need for a wealthy bride. I look forward to the admirable Alexander’s story; however, the one I am most excited about is the story of forty-year-old Viola Kingsley, the woman who thought she was the Countess of Riverdale only to discover that her three adult children are illegitimate. I think we will have to wait until 2018 for her story.