Review and Q&A - - The Ultimate Betrayal 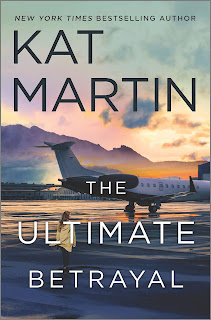 To prove her father’s innocence, she’ll have to turn a killer's sights on herselfWhen journalist Jessie Kegan’s father is accused of espionage and treason, Jessie has no doubt the man she looked up to her entire life is innocent. Worse yet, before Colonel Kegan can stand trial, he’s found dead of a heart attack…but Jessie knows it was murder. Forcing down her grief, she’s determined to use her investigative skills and resources to clear her father’s name. But going after the truth means Jessie soon finds herself in the crosshairs of a killer who wants that truth to stay buried with her father.Protecting Jessie Kegan is a job bodyguard Brandon Garrett can’t refuse. Jessie isn’t just a client at Maximum Security—she’s the sister of his best friend, Danny, killed in Afghanistan. With dangerous forces gunning for Jessie from every angle, keeping her safe will mean keeping her close and Bran finds their mutual attraction growing, though being Danny’s sister puts Jessie out of bounds.With their backs against the wall, Jessie and Bran will have to risk everything to expose her father’s killer—before his legacy dies with his daughter.
PJ's Thoughts:
I've enjoyed many of Kat Martin's romantic suspense novels but her newest, The Ultimate Betrayal, is one of my favorites. This book opens with a bang and the intensity never lessens. I was sucked in immediately, flipping pages with rapt attention until the very end.
Jessie and Bran are both intriguing characters with whom I engaged almost immediately. They're likable, honorable, determined in their quest for justice, and have incredible chemistry. I admired them as individuals and rooted for them as a couple. Martin puts them through the wringer before giving them their well-earned happily ever after. I loved Bran's sexual need for Jessie but also his gentleness and understanding as he helped her overcome a difficult obstacle. I respected Jessie's bravery both in her determination to discover the truth surrounding her father's death as well as how she confronted the trauma from her past. I enjoyed watching investigate as a team and come together as a couple, appreciating the respect, understanding, acceptance, and love that grew between them. They're one of my favorite Kat Martin couples.
A large portion of this book was on the action, danger, and suspense facet of the story but that doesn't mean Bran and Jessie's relationship takes a back seat. It's seamlessly interwoven into the intrigue with Bran's initial obligation to keep Jessie safe which gradually becomes friendship that evolves into sexual attraction and, finally, love. It's a gradual and realistic transition that checked all my HEA boxes.
The suspense portion checked a whole lot of boxes too. Martin kept me on the edge of my seat with a tightly woven plot that had me flipping pages, fully engaged, and wondering where the next twist was going to take me. I spent a fair amount of time alternating between gasping and holding my breath. And just when I thought everything was okay, Martin threw in another twist. It wasn't until I  turned the last page of the epilogue that I allowed myself to finally breath easy. I love when an author pulls that off.
If you're looking for a fast-paced, action-packed romantic suspense story with sizzling chemistry and enough twists and turns to keep you glued to the pages from start to finish, I highly recommend The Ultimate Betrayal.
~~~~~~~~~~~~~
Q&A with Kat Martin

Welcome, Kat! Thanks for chatting with me today and thank you for another book I was unable to put down. What would you like readers to understand about Jessie and Bran, and their perilous journey to love?

Though I’ve written more than 70 books in my long career and I loved writing them all, some are my special favorites.  The Ultimate Betrayal is one of those books.  Bran and Jessie were just so much fun!  I think they really got each other and that was one of the reasons liked the book so much.

I was impressed by the amount of technical data in The Ultimate Betrayal. What kind of research was required for this book?

I spend a lot of time researching my books, though I always hope the information just blends in.  Because this story was set around a military base, it took an exceptional amount of work.  I mean, what the heck do I know about an army base?  A lot more now than I did then!  I was grateful for the input of an author friend of mine, a former Green Beret, Colonel Thom Nicholson, who helped me get the terms right and watched for any errors that I might have made.

We were introduced to characters from the Maximum Security San Diego office in this book and you also floated the possibility of a new office in Denver. What does this mean for future books and/or offshoot series?

I have one more Garrett brother’s story to complete the series or at least the first part of it.  Reese’s book is finished and will be out in 2021.  Currently, I’m working on expanding the series into the Denver office.  I’m excited to set more books in the beautiful state of Colorado.

The characters in this book (both good and bad) were so real to me, as were the emotions they evoked. As the author, are you able to remain objective while writing or do your characters trigger the same emotions (anger, fear, love) in you that they do in readers?

I feel the same emotions the reader feels, possibly even more pronounced.  I know the characters better, having worked with them for six months.  When they make me laugh or cry, I know I am telling their story the way I should.

I’ve been making a wish list of places I want to visit once it’s safe to travel again. What destinations are on your post-pandemic travel list?

Next year my hopes are simple.  I’d love to go back to New York for the Thriller Writers conference, one of my favorites in one of my favorite cities.  I also look forward to the Western Writers of America convention, which is basically my author-husband’s conference but tons of fun with all the cowboy authors who attend.  I plan to spend the winter in my new home in northern Arizona.  No Europe plans next year.  I’ll just be thankful to get out of the house!!

I enjoyed seeing more of Reese in The Ultimate Betrayal. Are you able to share anything about his book and when we might expect it?

We don’t have a title for Reese’s book yet.  His story was difficult because he’s the CEO of a company, not a detective or bounty hunter.   I kind of like that he lives in a different world, with very different problems.  It turned out to be surprisingly high-action and we get to spend time with Bran, Chase, and Hawk again.

Thank you, Kat! Would you like to add anything or ask my readers a question?

I’d just like to thank all the wonderful readers I have heard from over the years.  I really appreciate their loyalty and as always, hope they enjoy The Ultimate Betrayal.