Review - - Waiting on a Cowboy

Waiting on a Cowboy 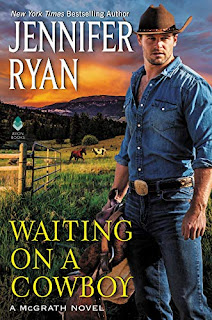 Tate McGrath just didn’t get it. Why was Liz Scott, his best friend—and the person he relied on and trusted most—suddenly avoiding him! When he finally tracks her down, he finds her with a man he knows nothing about and she’s been dating for weeks. Suddenly, he can’t make himself ignore her tempting curves and deep green eyes, and all he wants to do is keep her all to himself. What was going on? Could he possibly be…jealous?

Liz had made the decision: stop carrying a torch for Tate and find a guy who wants to be her everything. Tate had always seen her as honest, dependable, smart, kind…Best friend, not girlfriend! And she needed to give up the dream of marrying the man she’d loved since preschool and move on.

But when Liz’s boyfriend turns dangerous, Tate steps up to help and soon realizes he’s the cowboy hero she’s been waiting for him to be all along.

Liz Scott has loved Tate McGrath since they were children but Tate has always kept his best friend firmly in the friend zone, not willing to risk that friendship by bringing romance into the mix. Until the day Liz moves on with someone else. Of course, Tate's entire family has always known he loves Liz as more than a friend but those blinders he's been wearing are pretty thick. It was always going to take something drastic to open his eyes. And the actions of the new man in Liz's life certainly qualify when his Prince Charming persona fades and the evil lurking beneath rises to the surface. With Liz's life in danger, Tate quickly realizes exactly how much she means to him, not as a friend, but as much, much more. But, after a lifetime of unrequited love, will Liz be willing to give him one more chance?

One of the things I most enjoy about Jennifer Ryan's romances is how she combines steamy romance with edge-of-the-seat suspense to reel me in and keep me eagerly turning pages from beginning to end. Waiting on a Cowboy has plenty of both. It's fast-paced, with sizzling romance, heart-tugging emotion, and a race to a surprising, life or death conclusion. It stole my breath and my heart. I can't wait to find out what she has planned for Tate's brother and sister!

Do you enjoy a blend of suspense and romance?

Have you read any of Jennifer Ryan's romances?