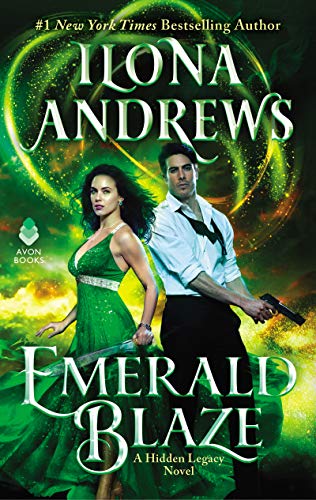 As Prime magic users, Catalina Baylor and her sisters have extraordinary powers—powers their ruthless grandmother would love to control. Catalina can earn her family some protection working as deputy to the Warden of Texas, overseeing breaches of magic law in the state, but that has risks as well. When House Baylor is under attack and monsters haunt her every step, Catalina is forced to rely on handsome, dangerous Alessandro Sagredo, the Prime who crushed her heart.

The nightmare that Alessandro has fought since childhood has come roaring back to life, but now Catalina is under threat. Not even his lifelong quest for revenge will stop him from keeping her safe, even if every battle could be his last. Because Catalina won't rest until she stops the use of the illicit, power-granting serum that's tearing their world apart.

After every book in the Ilona Andrews Hidden Legacy series I wonder how they will possibly be able to top what they've just written. And then the next book in the series comes along and...they do. Emerald Blaze is filled with everything I love about this series. The world building continues to blow me away. I know, I really do know that this is a fictional world but everything in it is so unbelievably vivid and realistic that I find myself completely immersed in it, reacting to the characters, danger, magic, and non-human beings as if it's all real. I engaged in a lot of gasping, hand-wringing, breath-holding, sighs, and, yes, a few tears, before reaching the end of this book. The characters are so well developed that they've become more like real people to me than characters in a story. I care about them and am fully engaged in their lives.The book starts a bit slow but quickly begins to build then ramps up and takes us on a life or death race to the finish. Catalina's character continues to strengthen and grow in this second book of her trilogy. As much as I liked Nevada, I like Catalina even more. She's growing into her power and position and I can't wait to see what comes next for her. Alessandro, also, shows significant growth in this story. I'm enjoying the person he's becoming and the effect that has on his actions and his tenuous relationship with Catalina. Their romance really develops in this book with unexpected twists and unveiled secrets that pack an emotional punch and create an ever deepening bond. These two have captured my heart and I am so hoping for their happily ever after. There are a couple significant obstacles in their path though, and one more book in the trilogy, which means more hurdles ahead. And I am here for every one of them.We also get a lot of familial interaction in this book, including Nevada and Rogan (heroine and hero of the first trilogy). I love the dynamics within the Baylor family and am especially enjoying the evolution of Arabella, Leon, Bern and others. Still keeping my fingers crossed for a trilogy for Arabella once she's a bit older.For maximum enjoyment of Catalina's character arc (without reading the entire series), I recommend beginning with Diamond Fire (a novella), then reading Sapphire Flames followed by Emerald Blaze. However, for a complete understanding of the Hidden Legacy world as well as the Baylor family dynamics, I suggest starting at the beginning of the series with book one in Nevada and Rogan's trilogy, Burn for Me, followed by White Hot, Wildfire, and then Catalina's books.
I've already read this book twice and I have no doubt I'll be revisiting it again before the final book in Catalina's trilogy is published. These characters have a tendency to not want to let go.
Posted by pjpuppymom at 12:30 AM