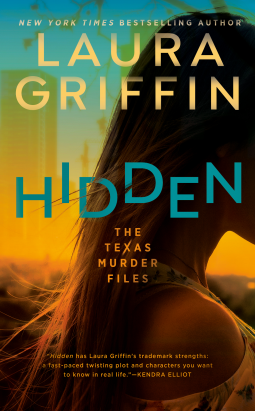 When a woman is found brutally murdered on Austin’s lakeside hike-and-bike trail, investigative reporter Bailey Rhoads turns up on the scene demanding access and answers. She tries to pry information out of the lead detective, Jacob Merritt. But this case is unlike any he’s ever seen, and nothing adds up. With the pressure building, Jacob knows the last thing he needs is a romantic entanglement, but he can’t convince himself to stay away from Bailey.Bailey has a hunch that the victim wasn’t who she claimed to be and believes this mugging-turned-murder could have been a targeted hit. When she digs deeper, the trail leads her to a high-tech fortress on the outskirts of Austin, where researchers are pushing the boundaries of a cutting-edge technology that could be deadly in the wrong hands.As a ruthless hit man’s mission becomes clear, Bailey and Jacob join together in a desperate search to locate the next target before the clock ticks down in this lethal game of hide-and-seek.

As a longtime fan of Laura Griffin’s Tracers series, I was happy to see that she’s branching out with The Texas Murder Files. The first book, Hidden, follows investigative reporter Bailey Rhoads and Detective Jacob Merritt as they try to solve the murder of a young woman on a popular jogging path. They soon realize this probably isn’t a crime of opportunity but something far more sinister.

The FBI wants Jacob and his partner off the case. Jacob wants Bailey to back away from it. Both persevere because there’s another woman somewhere who’s connected to the victim, and her life may be in danger. They are determined to find and warn her. For Jacob, there’s also a need to hold accountable the person who murdered a woman in his city.

Along the way, Bailey stumbles across a new form of technology that has potentially disastrous ramifications for personal privacy. It’s particularly dangerous for anyone who has a good reason to hide. Bailey resolves to find out how it’s connected to the murder and whether it can help locate the woman she believes is the killer’s intended second victim.

The premise is timely and intriguing, and I liked the ways Bailey and Jacob pursue the case from their different angles. They’re easy to root for, especially when they’re trying to save someone they believe is in danger and doesn’t know it. I particularly enjoyed seeing Bailey pursue leads that didn’t occur to Jacob.

The supporting characters were also very likable. Bailey has friends at the newspaper and is close to her sister’s family. She also is on not-quite-friends terms with a skip tracer who becomes important later in the book. He doesn’t have many scenes, but his personality comes across immediately. Jacob’s partner is equally determined to see justice delivered for their victim. She and Jacob function well as buddies with no hint of any desire for more on either one of their parts.

There are also scenes involving the woman Bailey and Jacob are seeking. She’s likable, smart, and brave, and the ultimate solution to her problem felt like a great one.

Bailey’s source for the tech issue is also likable but not always understandable. He initially refuses to help her beyond a basic level, then agrees to do so, then helps her still more. All that’s fine, but  even after warning her there’s someone at his company, where surveillance is ubiquitous, with an axe to grind over this tech, he takes no precautions. That felt like a stretch.

Although the romance between Jacob and Bailey was satisfying overall, it didn’t entirely work for me. They’re both dedicated, hot, and likable, but I was never sure what either of them saw in the other. Why this person instead of some other dedicated, hot, likable individual? Jacob knew dating a reporter could be a problem with his fellow cops, Bailey withheld information because of his job, and he wasn’t entirely honest with her because he wanted her to back off of the story. Yet they kept coming back to each other. I would’ve liked more insight as to why.

Issues like these and some others make the book feel less polished than it might have. It’s just not quite as solid as other books of Griffin’s I’ve read. I did enjoy it, though, and I do recommend it.