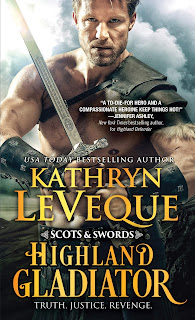 When Lor Careston's quiet Highland village was attacked and burned, he felt helpless against the raiders who destroyed his home. Seeking revenge, but lacking the fighting skills he needs to execute his mission, he sets out to find the Ludus Caledonia—a mysterious fight guild that turns men into warriors.

Lor trains hard, proves himself in the ring, and earns a place with the very clan that decimated his home, having decided to set his plan for revenge in motion from inside the clan. But his plan didn't include Isabail Keith, a fiery lass who prefers broadswords to embroidery and isn't afraid to stand with the warriors of her clan. Lor thought the Keiths were his enemies, but when Isabail is threatened, he'll have to decide what he's willing to risk for the woman who has captured his heart and the clan that has become his home.

Kathryn Le Veque takes readers to Medieval Scotland for an emotional saga of clan feuds, a special place that trains only the best warriors, and a man and woman destined to love only one another. I couldn't put it down.

Le Veque created such a perfectly detailed sense of time and place in this book that I was immersed completely into the lives of those living in the fifteenth century Scottish Highlands. Her characters are fully formed, fully engaging me in their lives. I loved Lor (an endearing hero with a transformative journey) and Isabail (a formidable, take-no-prisoners warrior in her own right) and their sweet, some might say, destined romance. I experienced their journeys with them, laughing, crying, cringing, and loathing (a particularly despicable villain). I may have cheered at the way in which the author served up justice in the case of that despicable villain.

The first half of the book was a bit slow while stages were set and characters formed but by the time the action picked up around the mid-point I was fully invested in both Isabail and Lor and the challenges they faced. Surrounding the main couple is a vividly depicted cast of secondary characters who propel the story forward, helping to reveal characters' hidden depths, of Lor in particular. I enjoyed the brotherhood at Ludus Caledonia and the friendships Lor formed there. Isabail's family provided splashes of humor, with siblings who show pesky brothers have been around in every century, and a father whose reaction to a question from Lor had me laughing out loud. Then there's Lor's grandfather who adds a particularly poignant secondary story line to the mix.

The tag line for this series is "Gladiator meets Fight Club in the Scottish Highlands" which sets pretty high expectations for this lover of Scottish historical romance. Le Veque met my expectations in this emotion-packed story that left me sighing with satisfaction and eagerly anticipating the next book in her Scots and Swords series. That book, Highland Defender, is scheduled to be released January 21, 2021.

Have you read any of Kathryn Le Veque's books yet? Do you have a favorite book or series?

Do you read Medieval romance? Which authors writing in that era do you most enjoy?