Review & Giveaway - - Lady Guinevere And The Rogue With A Brogue 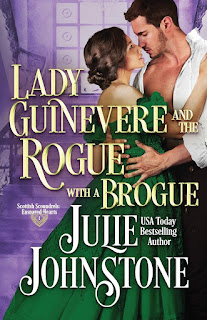 Five years ago he humiliated her. Five years ago she betrayed him. And when fate forces them together once more, they’ll discover what burns hotter- vengeance or desire.Lady Guinevere Darlington has spent the last five years trying to forget the beautiful rogue who stole her heart and then crushed it under his shiny black hessian. Humiliated by the blighter with the unforgettable brogue and left to weather the wagging tongues of the ton alone, she started a secret society that delivers justice to ill-intentioned rakes, and she managed to avoid having to wed—until now. But while her time is up, her determination is not. If she must take a husband, she’ll do so on her own terms. She has a plan, and a possible candidate, until the Scot she once loved returns to London and throws her life into salacious turmoil yet again.

Asher Talbot, the newly minted Duke of Carrington, has nearly perfected his ability to repress memories of the stunning, stubborn lass who long ago captivated him with her innocent charm, then slayed him with her duplicity. He channeled his anger into continuing to build the distillery empire he started when he thought he was a by-blow. But now his company is in danger, and he intends to secure his inheritance to save it, even if it requires pursuing the perfidious enchantress he disavowed. True reconciliation is not part of his plot, but hints of the Guinevere he thought he knew leave him questioning everything.

When fate, fortune, and a cunning scheme bring these two together, their mutual attempts to torture each other ignite the dormant desire between them. But secrets surround them, and they’ll have to unravel each one before the love they glimpsed is lost forever.
PJ's Thoughts:
After several years of writing Medieval Scottish romance, Julie Johnstone returns to Regency-era England with this first book in her new series. It's an enemies-to-lovers, second-chance romance between a man and a woman who have each spent the past five years believing they were betrayed by the other. In fact, they were both betrayed, by someone still trying to keep them apart.
Johnstone's storytelling skills shine in this new book that's filled with sharp banter, humor, emotion, and plenty of twists and turns on the path to a happily-ever-after. And, with these two main characters, that path is a rocky one. I can't remember when I've encountered a hero and heroine with quite as much stubborn pride and lack of trust as these two. Though rekindled desire sparks early, forgiveness is slow to follow, and trust even slower. They have a tendency to believe everything they're told by others and nothing they tell each other. Not to mention, jumping to conclusions at every turn. I would have washed my hands of them had it not been for my faith in Johnstone's guiding hand.
The characters in this book, both main and secondary, are fully developed with complex layers and while supporting characters don't steal the spotlight from the hero and heroine, they contribute significantly to the overall story. I'm especially intrigued by a non-couple I'd love to see featured as a couple in a future story in the series. I'm intrigued by them individually and hoping for a redemption arc followed by an HEA.
~~~~~~~~~~~
Do you have a favorite historical era?
Have you read Julie Johnstone yet? Do you have a favorite book or series of hers?
One randomly chosen person who posts a comment before 11:00 PM, August 19, will receive an e-copy of Lady Guinevere And The Rogue With A Brogue.
*Must be 18 or older
Posted by pjpuppymom at 12:00 AM