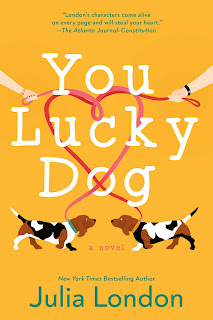 Carly Kennedy's life is in a spiral. She is drowning in work, her divorced parents are going through their midlife crises, and somehow Carly's sister convinces her to foster Baxter--a basset hound rescue with a bad case of the blues. When Carly comes home late from work one day to discover that the dog walker has accidentally switched out Baxter for another perkier, friendlier basset hound, she has reached the end of her leash.When Max Sheffington finds a depressed male basset hound in place of his cheerful Hazel, he is bewildered. But when cute, fiery Carly arrives on his doorstep, he is intrigued. He was expecting the dog walker, not a pretty woman with firm ideas about dog discipline. And Carly was not expecting a handsome, bespectacled man to be feeding her dog mac and cheese. Baxter is besotted with Hazel, and Carly realizes she may have found the key to her puppy’s happiness. For his sake, she starts to spend more time with Hazel and Max, until she begins to understand the appeal of falling for your polar opposite.

Any cover with two adorable dogs on it will always draw my interest and Baxter and Hazel more than live up to their cuteness. In fact, they pretty much steal every scene they're in. It's clear the author has a great love for, and experience with, dogs. They're the catalyst that brings Max and Carly together and keeps their relationship moving forward. By the end of the book, I wanted to adopt both of them. Some of the other characters, not so much.

Carly and Max are both likable characters - okay, Carly is pretty annoying at the beginning but she grows into her likability - and though they may seem an unlikely pair at first, London deftly guides them along the path to eventual friendship with the potential for more. It's a sweet, low-key romantic journey, with a happy ending, but, as this is a romantic comedy, not a contemporary romance, it takes a bit of a back seat to everything else going on in their lives, especially Carly's. Both are at turning points in their careers, with Max on a tenure track at the university and Carly trying to salvage her sagging PR business while keeping her dreams of a New York career alive (she has two clients, neither of which is doing anything to help further those goals). A great deal of the story focuses on Carly's clients and career. Then there are the families.

Honestly, I don't blame Carly for wanting to move to New York. With her family, I'd be setting my sights much further. Like, maybe Australia. As for Max's family, I felt London did a credible job of portraying  an adult character with Autism (Max's brother) and both the joys and challenges of living with a person with special needs. I liked Max's father and brother a whole lot more than anyone in Carly's family, especially her mother. Carly's sister may have been annoying but I couldn't find one single redeeming quality in her mother. And I looked really hard.

Overall, I enjoyed Carly's journey and was happy with the decisions she made, as well as how they came about. The author could have taken an easier path with her but it wouldn't have felt as authentic to her character. Because of that, I was confident she would move forward with no regrets and that her relationship with Max would be stronger because of it. I liked Max's nerdy sweetness and how he and Carly balance one another. I liked his relationship with his brother and his determination to support, encourage, and protect those he loves. And I absolutely adored the dogs.