Review - - Who Wants to Marry a Duke 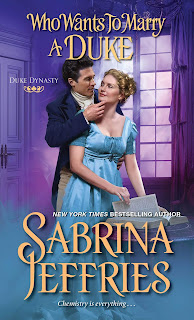 A past kiss with adorably bookish Miss Olivia Norley should be barely a memory for Marlowe Drake, the Duke of Thornstock. After all, there are countless debutantes for a handsome rakehell to charm beyond a young lady whose singular passion is chemistry—of the laboratory type. But Thorn has not forgotten—or forgiven—the shocking blackmail scheme sparked by that single kiss, or the damage caused to both their names. Now Thorn’s half-brother, Grey, has hired the brilliant Miss Norley for her scientific expertise in solving a troubling family mystery. And the once-burned Thorn, suspicious of her true motives, vows to follow her every move . . . For Olivia, determining whether arsenic poisoning killed Grey’s father is the pioneering experiment that could make her career—and Thorn’s constant presence is merely a distraction. But someone has explosive plans to derail her search. Soon the most unexpected discovery is the caring nature of the reputed scoundrel beside her—and the electricity it ignites between them . . .
PJ's Thoughts:
Sabrina Jeffries is one of my favorite historical romance authors when it comes to creating family dynamics intertwined with a mystery that evolves across the course of a series and keeping me engaged from beginning to end. I was intrigued by the concept of a thrice-married woman with five children, including three sons who are all dukes. Toss in the gradually developing mystery surrounding the deaths of those husbands, plus the death of a brother-in-law, and I was hooked.
In Who Wants to Marry a Duke, the siblings inch closer to discovering the truth regarding the deaths of their fathers and it's becoming clear their investigations are making someone very nervous. Miss Olivia Norley, a trained chemist and not your typical society miss, is hired to conduct tests on the remains of one of the fathers and Thorn, with whom she has an adversarial past, is determined to unmask her for the devious fraud he's certain she is. With him dogging her every step, an eventual explosion is inevitable. But what will happen when the dust settles around this plain-speaking, scientific-minded, inexperienced miss, and the suspicious, very experienced duke determined to seduce her, even while he doesn't trust her?
Okay, let me start by reviewing the things I liked about this book. I loved Olivia. She's such a breath of fresh air, with her brilliant mind and focused determination to have a successful career in her chosen field when that was way outside the norm for women. I was in her corner, cheering her on the entire way.
I enjoyed catching up with couples from the first two books and watching their relationships evolve post-marriage. I'm also enjoying learning more about their mother and am intrigued by the possibility of a new love interest for her.
Jeffries has woven an interesting mystery that still has me trying to figure out the answers. With multiple suspects, and still no clue as to the reason for the murders, I have a feeling she'll have me guessing right up until the reveal. I love when an author accomplishes that.
What didn't work well for me in this book was the romance and that was largely due to Thorn. He came across as immature and self-serving, and I really didn't like him or the way he treated Olivia for much of the book. I also wanted to feel emotional chemistry between him and Olivia, mostly for her sake, but I just didn't, at least not on his side. He does come around at the end of the book, and others may not have this issue with him, but he left me cold. When you read as many books as I do, that's occasionally going to happen.
Still, hero issues aside, I liked the rest of the book, I'm enjoying the series, and I'm already looking forward to the next couple to take center stage.
Posted by pjpuppymom at 12:30 AM