You Had Me at Hola
by Alexis Daria
Publisher: Avon
Release Date: August 4, 2020
Reviewed by PJ 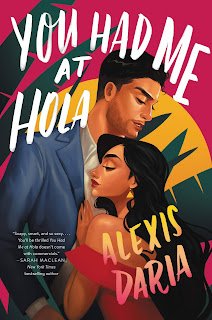 Leading Ladies do not end up on tabloid covers.

After a messy public breakup, soap opera darling Jasmine Lin Rodriguez finds her face splashed across the tabloids. When she returns to her hometown of New York City to film the starring role in a bilingual romantic comedy for the number one streaming service in the country, Jasmine figures her new “Leading Lady Plan” should be easy enough to follow—until a casting shake-up pairs her with telenovela hunk Ashton Suárez.

Leading Ladies don’t need a man to be happy.

After his last telenovela character was killed off, Ashton is worried his career is dead as well. Joining this new cast as a last-minute addition will give him the chance to show off his acting chops to American audiences and ping the radar of Hollywood casting agents. To make it work, he’ll need to generate smoking-hot on-screen chemistry with Jasmine. Easier said than done, especially when a disastrous first impression smothers the embers of whatever sexual heat they might have had.

Leading Ladies do not rebound with their new costars.

With their careers on the line, Jasmine and Ashton agree to rehearse in private. But rehearsal leads to kissing, and kissing leads to a behind-the-scenes romance worthy of a soap opera. While their on-screen performance improves, the media spotlight on Jasmine soon threatens to destroy her new image and expose Ashton’s most closely guarded secret.

Alexis Daria had me from page one. I adored this book! Filled with humor, passion, swoon-worthy romance, and Latinx authenticity, You Had Me at Hola is on my Best of 2020 watch list and should be on everyone’s summer reading list. It's just that good.

I love the over-the-top drama that is prevalent in both American soaps and Latin telenovelas. Telling a story within a story, Daria reels readers in with the drama of Jasmine and Ashton's romance as well as that of their television characters, Carmen and Victor, and I was there for all of it. I love the chemistry between them (both on-screen and off), the snappy dialogue that results from their less than ideal first meeting, the friendship that slowly begins to grow, and the slow-burn romance that threatens to flame out of control.

Daria's research gives readers a realistic look at the making of a television show. The extra touches and attention to detail left me feeling as if I was actually on set.

Both families (Jasmine's and Ashton's) are central to the characters' evolution as well as the overall story and Daria depicts them with the joy, frustration, well-intentioned meddling, and unconditional love of a close-knit family. I adore Jasmine's cousins, Ava and Michelle (the other two Primas of Power) and am delighted that Daria plans a book for each of them. I haven't had nearly enough of Abuela Esperanza and the rest of the Rodriguez family.

This is a romantic comedy and Daria has packed it with spot-on humor but also tempered it with steamy chemistry, heart-tugging emotion, rapid-fire banter, and complex, multi-layered characters I couldn't get enough of. I love Jasmine's confidence and ambition but also her vulnerability. I want to hang out with her, and her cousins. I want to cook (and dance) with Abuela Esperanza. I want to shake some sense into Ashton, then hug the stuffing out of him, before I jump his sexy self. Yeah, yeah, I know he's Jasmine's but a girl can dream, right? In short, I want to crawl into the pages of this book and that is why You Had Me at Hola gets my Top Dish rating.