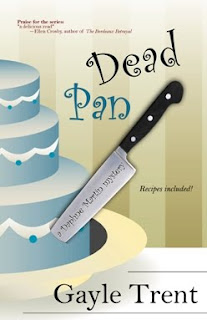 In Murder Takes the Cake, the first book in this series, Daphne Martin moved back home following the end of her abusive marriage and opened a cake decorating business, looking forward to a quiet, uneventful life. That all changed when she was accused of poisoning the town gossip but Daphne turned amateur sleuth and, with the help of a police detective, discovered the real killer and cleared her name. In her new book, Dead Pan, Daphne's ready to put her amateur detective career behind her and return to the kitchen but her creator, Ms. Trent, has other plans.

When the majority of the guests at the Brea Ridge Pharmaceutical Christmas party become violently ill with symptoms resembling food poisoning and poor Fred Duncan ends up in a coma, the police come knocking at Daphne's door. She's positive that the cake she made for the party isn't the reason behind the mysterious illness but the town's still talking about her role in that mess with the murder of the town gossip and the police are keeping their options open. She's promised her sister that she won't place herself in the path of danger again by investigating another murder but when poor Fred dies and his mother begs Daphne to find his killer...well, what's a girl to do?  With the assistance of Fred's young cousin and Daphne's "sort of" boyfriend, reporter and newspaper editor, Ben Jacobs, the search is on to find Fred's killer.

Trent has penned a light, fun, cozy story with a likeable heroine, quirky secondary characters, a second chance at love, a devious villain and a realistic mystery with enough twists and turns to keep the reader guessing. Mix in some of Daphne's recipes (especially the cake balls) and you have a delicious story that has me wanting more. Luckily for me, the next book in the series, Killer Sweet Tooth, is scheduled to be published in 2010.