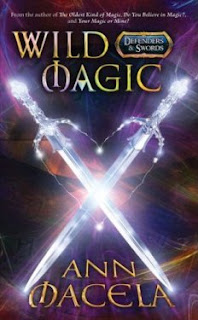 Twenty-five years ago: Ten years after their grandfather's death, cousins and magic practitioners, Bruce Ubell and Alton Finster receive their grandfather's diary with instructions that take them to a secret room in the basement of the family mansion. Awaiting them in the dark, musty room is a pouch containing their evil destiny.

Careful, very careful not to touch the contents, he loosened the drawstrings. Holding the bag by its bottom corners, he slid the contents out of their covering and into the bowl.

The two of them sat until dawn, staring at what fell out.

The contents stared back.

With those final two sentences of the prologue, Macela had me hooked. I could hardly wait to find out what happened next!

Irenee Sabel is the beautiful daughter of a rich, socially prominent family. As a member of the elite group of magic practitioners known as Swords, she has been given her first solo assignment: to find and confiscate the Cataclysm Stone, an evil fifteenth century relic being used for personal gain and evil purposes by ruthless businessman, Alton Finster. While attending a party at Finster's home, she sneaks into his study and is about to open the secret floor safe, where she has detected the relic's presence, when she hears someone picking the door lock. She quickly casts an invisibility spell over herself before the door opens and a handsome man in a tuxedo enters the room. Immediately identifying him as not having magical powers, she's confident he will never be aware of her presence.

She heard him curse before closing the safe and the portrait. His hand still on the frame, he suddenly froze for a few seconds, then whipped around.

And looked right into her eyes.

He could see her.

How was this possible?

As she looked at him, a pulse of excitement ran down her backbone, and she was suddenly filled with a sense of well-being and...joy? Her magic center under her breastbone fluttered.

Jim Tylan, agent for the Department of Justice and Homeland Security, has always been aware of his "hunches" - that little voice in his mind, the tingling at the back of his neck - that warn him of danger and help him solve cases. While searching Finster's study for the second set of financial records that he hopes will help the DOJ finally bring the corrupt arms and drug kingpin to justice, his hunch tells him he's not alone. But when he turns around he's not at all prepared for the jolt of desire that fills him when he sees the beautiful woman standing on the other side of the room...the beautiful, glowing woman.

A man who is not a warlock should not be able to see through Irenee's spell. Jim is invited to the practitioners' campus where it soon becomes evident that he is able to do much more than just see through Irenee's invisibility. He's what the practitioners call a "Wild Talent", with magical abilities of his own. It's all very "woo woo" to Jim and a struggle to accept but this is Irenee's life. As the two join forces to bring down Finster and Ubell, their initial attraction grows and they begin to bond - emotionally, physically...magically. It soon becomes apparent that they are soulmates, two people destined to be one another's mate for life. But, for Jim to accept the "soulmate imperative", he must also accept Irenee's position as a Sword, a position that will always place her in danger from evil forces. Can this man who values control and has been trained to be a protector live with a woman who can protect herself and probably him too?

Ann Macela has written a captivating, suspenseful love story set in a realistic world of magic that I had no trouble believing. The characters come alive in her talented hands, the story flows smoothly with heart-stopping action and villains that give off an aura of such intense evil that I got chills. What stood out the most for me in the book, however, were her descriptions of the magic. They were so vivid, so vibrantly painted that I could easily envision each of the magical acts as they occurred. My only disappointment is that I waited so long to read an Ann Macela book!

Do you believe in magic? Have you read any of Macela's books? One lucky commenter will win a signed copy of Wild Magic.
Posted by pjpuppymom at 2:00 PM