Historical author Claudia Dain began her writing career in seventh grade and instantly fell in love...with descriptive essays. She continued writing them and eventually attended the University of Southern California as an English major. She was first published in 2000, is a two-time RITA finalist, and a USA Today Bestselling author of over a dozen books. Her latest is the mass market release of THE COURTESAN'S WAGER, out April 6. She is also one of the ten lovely Goddesses over at The Goddess Blogs. Please help us welcome Goddess Claudia Dain to The Romance Dish! 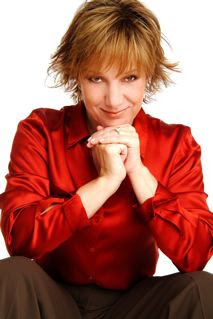 I don't know if this is a secret or not, but some books are easier to write than others. You never know when you start if a book is going to fly out of you, laughing and carefree, or make you suffer the agony of death with every word choice. (You may think I'm exaggerating. I'm not.)

You also don't know if a book is going to stay easy just because it starts easy. Some books lull you into a sense of confidence only to turn on you like a snarling wolf at page 127. Suddenly, they turn hard, and you sweat to get the words on the page.

I've had scenes that took me 30 minutes to write and others that took me 30 days. And you can't tell. One doesn't read strained and the other smooth. I'm convinced of that. I may be kidding myself, so you be the judge. There are two snippets of scenes below from The Courtesan's Wager, available April 1. One was easy, the other hard. I can remember which was which because I =never= forget agony in any form, but can you tell?

I'll mail an autographed copy of The Courtesan's Wager to one commenter (continental US only), whether you guessed right or not, because I really don't think you'll be able to tell, and what kind of rigged contest would that be?


Excerpt 1:
She was trapped within roses, could she not see that? She couldn't get away now, not even if he allowed it. Even so, he could not resist. He never could. He never had.

He raised his arms out toward her, and with his fingertips, he pushed against her shoulders. She stumbled back slightly, more fully wedged in rose petals, the thorns grabbing at the muslin, holding her fast, holding her deep within their embrace.

Embrace, yes, that was the word.

He moved forward, lifted her chin with a fingertip, gazed once more into her luminous eyes, and for what had to be the last time, what must be the last time, kissed her on the mouth. She opened beneath his lips like, yes, like a flower. Warm and moist and ready. And the kiss deepened and lengthened far beyond what he had intended, though he had intended none of this, and he fought the urge to pull her against him, but he kissed her still.

Kissed her amidst the roses.

Kissed her in the dark quiet of the conservatory.

Kissed her, knowing he would never be the man she wanted.


Excerpt 2:
Everyone stopped, turned, and stared at her. She couldn't have been happier. She was so very tired of everyone ignoring her at the first opportunity. Everyone except Cranleigh. If being slightly scandalous and forward was what was required to keep a man's interest, well then, that's what it required. There was little point in bemoaning the fact. She had suspected long ago, long before Cranleigh's first kiss, that men were little better than ravaging beasts. After Cranleigh's first kiss, and indeed upon all his subsequent kisses, she had known it for a fact.

Iveston looked down at her from his very compelling height, his brow furrowed in surprise. He glanced around the room almost negligently, smiled slightly at her, and said softly, "Perhaps the conservatory?"

Amelia swallowed firmly and answered, "Why not?"


The Courtesan's Wager by Claudia Dain 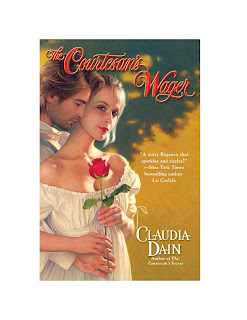 Lady Amelia is the daughter of a duke and, unlike her cousin Louisa, is not at all distracted by a rakish wit or a pair of seductive blue eyes. She is going to be a duchess, which means that she must marry a duke. In the three years that she's been out in Society, she has, to her complete dismay, not found a single duke who appears even slightly interested in her. Being a sharp girl of a very determined nature, Amelia cannot ignore that both Caroline and Louisa made very quick and very happy marriages. It was beyond obvious that Sophia Dalby had a firm hand in each match. Swallowing her considerable anxiety about approaching a former courtesan, Amelia asks Sophia for help in snagging a duke.

Sophia is delighted to help. But, as is becoming obvious to even the most casual observer, Amelia gets more than she anticipated from her alliance with Sophia. Will Amelia marry a duke, after all?

For more about Claudia and her books, please visit her website: http://www.claudiadain.com/
Posted by Andrea at 12:05 AM