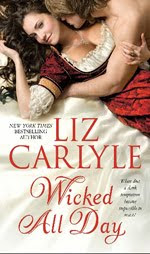 I discovered Liz Carlyle fairly late in the piece, thanks to my wonderful writer friend Christine Wells who is a long-time fan. It's wonderful when you discover a great author who's got a BACKLIST!!!! Yum!

So I'm gradually catching up on the older Liz Carlyles and gaining a lot of reading pleasure as a result. Still got a couple to go. And in the meantime, I'm reading the newer stuff. Given that all her books are linked, I'm beginning to feel a bit like a time traveller, but that's OK. A bit of dizziness is welcome when the stories are as delicious as these.

WICKED ALL DAY is the second in the current series. The first was the luscious TEMPTED ALL NIGHT. The books will stand alone and my experience indicates you don't have to read them in order. But having said that, it's nice to see how the different threads of the stories weave together.

Zoe Armstrong is the Marquess of Rannoch's troublesome daughter who has inherited far too much of her father's stubbornness, temper, spirit and determination to settle into life as a decorous Regency miss. Zoe is wild and inclined to kick over the traces at the slightest - or sometimes even no! - provocation. She's spectacularly beautiful and in possession of a huge dowry, thanks to her father who loves her dearly even though he struggles to control her unruly ways.

Zoe has received a number of offers of marriage and has refused them all. Her father is at his wit's end as to how he can settle this passionate, difficult child who is so close to his heart. Because Zoe has one insurmountable mark against her in the Regency marriage market - she's illegitimate. And while she's tolerated in society because of her connections and her dowry and her beauty, her outlandish behavior through several Seasons threatens to make her persona non grata outside her family.

Then disaster strikes. Zoe and her distant cousin Robin Rowland are caught in each other's arms in a private room at a ball. She's forced to accept Robin as her betrothed to avoid a major scandal.

Robin and Zoe have always been best friends, a pair of mischief makers in league against the world, so this arrangement should suit everyone. Unfortunately, Robin is in love with another woman and while he lines up to do the honorable thing, his wretched unhappiness casts a blight on the whole family and particularly on Zoe. Zoe too comes to loathe her engagement, not just because it has changed Robin, but because she gradually realizes that while she loves Robin like a brother, the man she loves like a soul mate is his older brother, Stuart, the Marquess of Mercer.

Stuart is of a type that is among my favorite romance heroes. The pattern of perfection, the high stickler, the immovable object. He's long been aware of Zoe's manifold attractions, but her wildness convinces him they would be utterly miserable together. He's held himself at a distance from her since a passionate kiss many years ago because he knows if he comes within range of the woman who fascinates him so powerfully, he'll forget good sense and fall under her spell. Zoe, who as a girl hero worshipped Stuart, has been hurt by his coldness in recent years, so the estrangement has only worsened.

Now Stuart is trapped in a nightmare where Zoe is to marry his brother. He has no hope of ever escaping her - and worse, he'll have to treat her as his beloved brother's wife, a member of his family. Understandably, he's in complete emotional turmoil for much of the story!

So we have a number of classic plot devices set up. The stick-in-the-mud hero and the headstrong heroine struggling against blazing attraction. Forbidden love that won't be gainsaid. Childhood affinity developing into a mature passion.

A family party in the country provides ample opportunity for confusion and mayhem. While Zoe and Stuart's romance is tempestuous and occasionally heart-wrenching, the secondary characters add enormous richness to the story. Robin in particular will touch you, as he struggles to change from a good-time Charlie to a man worthy of the woman he loves and of Zoe, who he loves like a sister. One of the many things I admire about Liz Carlyle's books is that while she often includes a cast of thousands, none of these people are cyphers. All are individuals with important roles in the story. Carlyle puts her characters into motion and the reader lies back with a big smile on her face and watches the increasingly complicated events unfold until the blissfully happy ending.

Oh, and did I mention the love scenes? Liz Carlyle does some of the best in the business. It's been a hot summer here in Australia but believe me, reading this book made it a HOT summer! And she writes like an angel with a wit and a wisdom that make her books keepers for me.

Be warned - when you pick up WICKED ALL DAY, it will make you READ all day!
Posted by Anna Campbell at 12:02 AM