Review - - In Bed With the Duke

In Bed With the Duke
By Christina Dodd
Publisher: Signet
Release Date: March 2, 2010 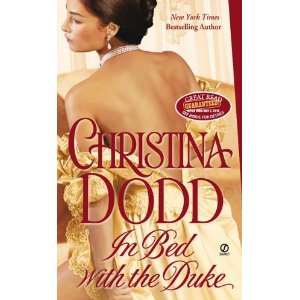 Demure lady's companion Emma Chegwidden never defies society’s rules. Until the night she runs straight into the arms of the mysterious and menacing Reaper . . . a man who rides the night-shadowed countryside and conceals his identity behind a mask. His goal is justice . . . or is it vengeance? Only one thing is certain: nothing will stop him from his dark purpose.

Michael Durant, long-lost heir to the duke of Nevitt, has a score to settle. Cynical, dangerous and ruthless, Michael is the last man on earth that sensible Emma should defy. But some challenges are too tempting to resist . . . and some passions too fierce to ignore. Soon Michael discovers in Emma the woman he has always longed for . . . a woman whose beauty and courage reach through to his tortured soul . . . and he will defy anything, even fate itself, to claim her . . .


After a four year hiatus from the sub-genre in which she was first published, Christina Dodd returns with a historical romance that will delight her fans and no doubt bring her many new ones. Liberally seasoned with her trademark humor and sensuality, this romantic adventure has me eagerly anticipating more historicals from Ms. Dodd.

Michael Durant, heir to the Duke of Nevitt, has been held prisoner in the tiny (fictional) European country of Moricadia for more than two years. His family believes him dead but, though there were times during his two years in the horrific dungeons of Prince Sandre de Guignard when many men would have wished for death, Michael is still very much alive. Now under house arrest at the home of the prince’s cousin, Lady Fanchere, and her husband, he’s content to let the ruling family believe him a broken man. But, under the cover of darkness, he has set into motion a daring scheme to exact revenge against the deGuignards and pave the way for the return to power of the rightful king of Moricadia. All is going according to plan until the arrival of Miss Chegwidden, a delightful young lady who just can’t seem to keep herself out of the path of trouble.

Emma Chegwidden believes Michael Durant to be a coward and is appalled that he allows his family in England to believe he is dead. The gently raised young lady who now labors as a paid companion reserves all her admiration for the mysterious Reaper, the hero of the masses who many believe is the ghost of the murdered King of Moricadia. Michael spends his days teaching her of the atrocities of Prince Sandre against the people, fueling her desire for justice, while the mysterious Reaper comes to her under cover of night, awakening her to the desires of her body and the love in her heart. But, will she be able to find forgiveness in her heart when she finally discovers the enormity of the secret Michael has been keeping?

I enjoyed this adventurous, romantic fairytale with a likeable heroine who evolves from a meek young lady, continually losing her way, to an intrepid woman willing to risk danger, and worse, for the man she loves and a hero whose tortured soul can only be healed by the woman who has captured his heart.

One more thing…Ms. Dodd’s method of giving the villain in this story his just desserts is one of the best “he had it coming to him” scenes I’ve read in quite some time!
Posted by pjpuppymom at 2:46 PM

Email ThisBlogThis!Share to TwitterShare to FacebookShare to Pinterest
Labels: 4.5 Star Review, Christina Dodd, In Bed With the Duke, PJ, Reviews