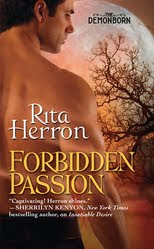 SHE SEES HIM IN HER DREAMS...

Fueled by her family's murder years ago, Dr. Marlena Bender has devoted her life to understanding violent criminals. But when a serial killer in this small Southern town starts taking the lives of women in diabolical ways--leaving trophies of his kills on Marlena's doorstep--it all hits too close to home. Terrified, Marlena turns to the only man she can trust...the man who saved her life.

BUT HIS SECRET IS HER WORST NIGHTMARE.

Sheriff Dante Valtrez would move heaven and earth to keep Marlena safe, but he's not the savior she thinks he is. A dark legacy runs through his blood and a dangerous secret lies within him. Now a fierce, hot, ruthless desire draws Dante and Marlena together--as a demonic force from his past threatens to rip them apart, destroying everything they hold dear.

When Marlena returns to her hometown of Mysteria, Tennessee, she's hoping to finally come to terms with the violent murder of her mother and sister. When she was just a young girl, they were torn apart by "monsters"...or at least Marlena thinks they were only monsters she imagined. But she is about to discover that the demons from her nightmares are all too real. The only other person who was there, the one who saved her from the same fate as her family, is the sheriff in town, and she hopes he can help her piece together the events of that horrible night. But she may not like the answer she finds.

Dante is half demon, and when he was thirteen years old he was ordered to kill a young Marlena as part of his final initiation. But he couldn't bring himself to end the innocent girl's life as she watched the murder of her family. So Dante swept Marlena up in his arms and took her to the only safe place he knew, a church. And by doing so, he becomes hunted by the demons who were his "family." But Dante no longer wants to be evil, so he makes a choice to try to make amends for the evil he has done. Twenty years later he returns to Mysteria to protect its citizens from the demons, from those he once knew.

A serial killer begins to stake and burn his victims, sending "souvenirs" to Marlena, making her fear for her life. Dante senses a demonic presence when he investigates the murders, and fears that his past has caught up with him, and the demons are after Marlena...and him. And this time, they won't fail. But Dante's real fear is whether the woman he has come to love will still see him as her savior when she learns who he really is. Dante need only know that love truly conquers all.


"You know part of me will always have that pull toward evil. But I couldn't kill you that day when you were a child." He pressed a kiss to her neck. "I couldn't..."

"I know, you saved me," she whispered.

"No." He traced a finger along her cheek. "You saved me that day, Marlena. You gave me back my soul."


Forbidden Passion is filled with action and suspense and will have you turning pages long into the night. After all of the angst and suffering that Marlena and Dante have gone through, they so deserve their HEA. You won't want to miss a minute of their journey.