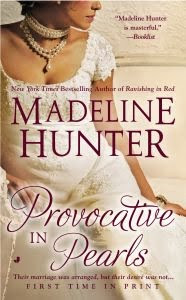 “Blame it on the pearls. They appeared so lovely above your naked breasts, Verity. You looked dangerously provocative, and I quite lost my good sense.” – The Earl of Hawkeswell


It is suppose to be a marriage of convenience. Well, convenient for the Earl of Hawkeswell as he is the one in need of a fortune. Not so convenient for his new bride, Verity, who pretty much had her life all planned out – marry the one man who could carry on her father’s legacy and live the rest of her days in her small community. Upon discovering her despicable cousin arranged the marriage in order to raise his social status, Verity takes destiny into her own hands by running away shortly after speaking her wedding vows. Planting evidence along the river to convince anyone and everyone that she has drowned, Verity spends the next two years incognito in the English countryside with a small group of ladies who hone their gardening skills counting the days until she reaches the age she can claim her fortune without the benefit of marriage.

The Earl of Hawkeswell is very frustrated, and has been for almost two years now. The single reason he choose to marry Verity – her fortune – is not accessible to him until she is declared deceased by the English government. Hawkeswell has not been able to touch one single pittance of the money. Without the reinforcements of his wife’s fortune, Hawkeswell’s finances have been stretched as far and as tight as possible. Hoping to forget his financial woes for a little while, Hawkeswell travels to the countryside with his good friend Sebastian Summerhay. However, escape is not in the cards for Hawkeswell as he encounters the very woman who has made his life a living hell, his long thought dead wife.

Determined to get his wife’s fortune, Hawkeswell believes it is in his best interest (and the interest of those in his care) to make the marriage work, so in addition to spending time together he extracts a commitment from Verity to accept three kisses from him every day. Those three seemingly insignificant kisses build the chemistry between Hawkeswell and Verity and before either one of them realize the consequences, the passion they feel for one another explodes and the sweetest of love blooms.

In Provocative in Pearls, which is Book 2 of The Rarest Blooms series, Madeline Hunter continues her tradition of lush, passionate writing that inevitably pulls at the strings of your heart and leaves you sighing with satisfaction. I am looking forward to the rest of this series and can’t wait to see what is up next for the ladies of The Rarest Blooms!