Review -- A Touch of Scandal 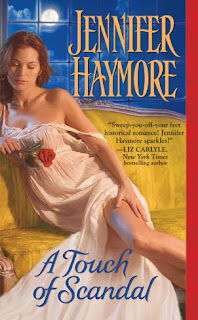 Garrett James, Duke of Calton, seeks revenge against the man he once thought was his friend. The man responsible for ruining his life—William Fisk. In the previous book, A Hint of Wicked, readers learned that after Waterloo and the death of his twin, Fisk caused Garrett to lose his memory and hid him in Belgium, away from his wife and child, for eight years. Now, back in England and still reeling from his recent scandalous divorce, Garrett only has vengeance on his mind. While hunting Fisk, Garrett meets a charming servant girl who captures his interest and incites a feeling he thought had died with his divorce. He finds out the hard way (literally!) that the lovely Kate is Fisk’s sister and immediately feels betrayed. Again.

Kate is confused as she is torn between her loyalty to her family and the strong attraction she feels toward Garrett. She has always felt completely lacking when it comes to her family because her mother has always preferred Kate’s older brothers to her. Despite that, Kate’s kept their secrets and loves them as they are all she has ever had. When the strong, handsome Garrett pays attention to her, she is at first surprised. No one has ever really paid her any mind before and she doesn’t know what to think. She goes with her gut and knows she’s made the right decision, regardless of the tragedy that follows. And just when she and Garrett believe they might be happy, something happens that could ultimately tear them apart.

Kate and Garrett were wonderful characters who constantly tugged at my heartstrings. Here is a girl who is treated poorly by her own flesh and blood and forced to keep their dirty secrets because she has nowhere to go and no one to turn to. She was lonely and craved a little attention, so naturally when Garrett showed an interest in her, she ate it up. And Garrett was a kindred spirit as he feels utterly alone since all he held dear was taken away. Their journey was quite the emotional roller coaster ride and I found myself rooting for them the whole way through. And just when you think all’s well, Ms. Haymore blindsides you with a shocking revelation. It certainly kept me turning the pages! All in all, I really enjoyed A Touch of Scandal, though I do believe I may have enjoyed it a bit more if I had read the previous book, A Hint of Wicked, just to get the full effect of all that happened to Garrett. If you like historical romances that engage your emotions and contain characters you cheer for, this is the book for you.