Review -- SEALed with a Ring 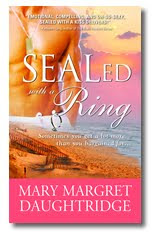 Owning the family car business is all JJ Caruthers has ever wanted. Presently, she runs the successful dealership very effectively. So it comes as a shock when her grandfather (the current owner) informs her that if she doesn’t get married within a year, he’ll sell off the business. His announcement doesn’t go over very well with JJ. While at the wedding of a dear friend’s daughter, JJ confronts her attorney who informs her that there isn’t anything she can do about it; her grandfather owns the business and can do whatever he wants with it. Hurt and angry, JJ attempts to leave when she bumps into a gorgeous stranger that tells her that he can make her feel better and they end up having a night of no holds barred sex. The next morning, JJ has regrets (she’s never done anything like that before) and leaves . . . with only knowing her lover’s first name and never expecting to see him again. So when she does at another wedding nearly a year later, she is almost happy that he doesn’t recognize her. Almost.

Navy SEAL medic and ladies’ man Davy Graziano is home on medical leave after being hit and badly injured by an RPG while fighting in Afghanistan. Soon after, his mother passes away and he is now responsible for his younger siblings, one of which has Asperger’s Syndrome. Scarred and suffering from sporadic memory loss, Davy has the strangest feeling of déjà vu when he meets the beautiful JJ on the beach at a friend’s wedding. Then he is completely stunned when she asks him days later to marry her . . . and that she will make it worth his while. Davy doesn’t want her money, but he does want her.

JJ comes up with the perfect plan: marry a SEAL because they’re hardly ever home and she can take over the family business. Perfect, until Davy turns the tables on her and has a few stipulations of his own. Their relationship starts off as a business deal that eventually turns into something more.

Mary Margret Daughtridge brings readers an emotionally touching story about finding love when you least expect it. JJ is wealthy and always taking care of others, but it isn’t until she spends time with Davy that she realizes just how lonely that life can be if you don’t open yourself up to anyone. Money can’t buy happiness. As a doctor, Davy is used to caring for others and wants only to do that for JJ. This book is the third in Ms. Daughtridge’s SEALed romances series, but stands completely on it’s own. If you enjoy stories with compelling characters who tug at your heartstrings, then SEALED with a Ring is just the book for you.