Review - - The Secret of the Glass

The Secret of the Glass
By Donna Russo Morin
Published by: Kensington
Release Date: March 1, 2010 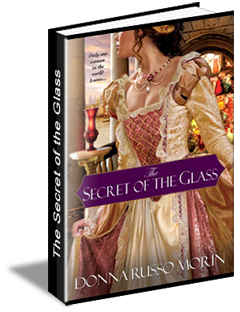 In the seventeenth century, Venice was a city of political intrigue, scientific discovery, power struggles between church and state and secrets. One of the most closely guarded secrets was the process of making the exquisite Murano glass - that prized and highly lucrative commodity of Venice that the men in power were determined to protect at all costs. Their fear of losing the secret to other countries was so great that they even went so far as to pass laws requiring all glassmakers to live on the island of Murano and prohibiting them from leaving Venice. It’s in this exciting, and dangerous, period of history that Morin has set her story.

The eldest of three daughters of renowned glassmaker, Zeno Fiolario, Sophia shares her father’s passion, and talent, for glassmaking. But, while Zeno is lauded for his skill, Sophia must ply hers in the middle of the night. The laws of the time prohibit women from engaging in trade and discovery would mean dire consequences for the Fiolario family so Sophia secretly creates masterpieces and her father presents them to the world as his own. Money flows into the family’s coffers, Sophia fulfills her dream of creating the glass and her father successfully hides his worsening health.

Everything is going well until the day a message arrives from a noble family asking for Sophia’s hand in marriage to a bitter, unattractive, middle-aged man who makes it very clear that his only interest in Sophia is the income from the family’s glassworks factory that will be his upon her father’s death. Suddenly, Sophia is thrust into an engagement with a reluctant and unwanted fiancé and must navigate the treacherous waters of the Venice Court where the slightest misstep could reveal the secret she’s been keeping, threatening the loss of her family’s home and business. But, when her worst fear comes true, who will come to her rescue: the handsome young man who makes her heart race, or the fiancé whose touch she can barely tolerate?

This is a story about a young woman struggling to realize her dreams while protecting her family, all within the confines of a restrictive society ruled by fear. Morin’s lush descriptions and captivating story held my attention throughout this book and by introducing real people, such as Galileo, into the story she has brought history to life. I was so deeply immersed in the time and place that I could feel the oppressive heat of the glass furnaces, the sea breeze that surrounds the island of Murano and would not have been at all surprised to open my window and hear the water of the Grand Canal lapping at a dock below or to gaze out that same window and see the campanile in Piazza San Marco where Galileo tested his telescope. There’s history and intrigue around every corner of Morin’s book with a healthy dose of romance giving it just the right flavor. I’m looking forward to reading more from this talented author.